I'm studying mail forwarding of mail sent between the Netherlands Indies and the west.

I have this complete letter sent from Batavia 16 July 1821 to Baltimore. On the back are two forwarding notes, which I transcribe as "Rotterdam 16 Nov 1821 Varkevisser, Dorrepaal & Brown’, and ‘Forwarded by G. Kolff from Liverpool 22 Novemb 1821".

Again I am interested in any information that can be found about these two forwarding agents. And what about the red mark SHIP? It must be struck in the US (New York?) - when was this in use? And does the manuscript rate say 39? How would such a rate be calculated? 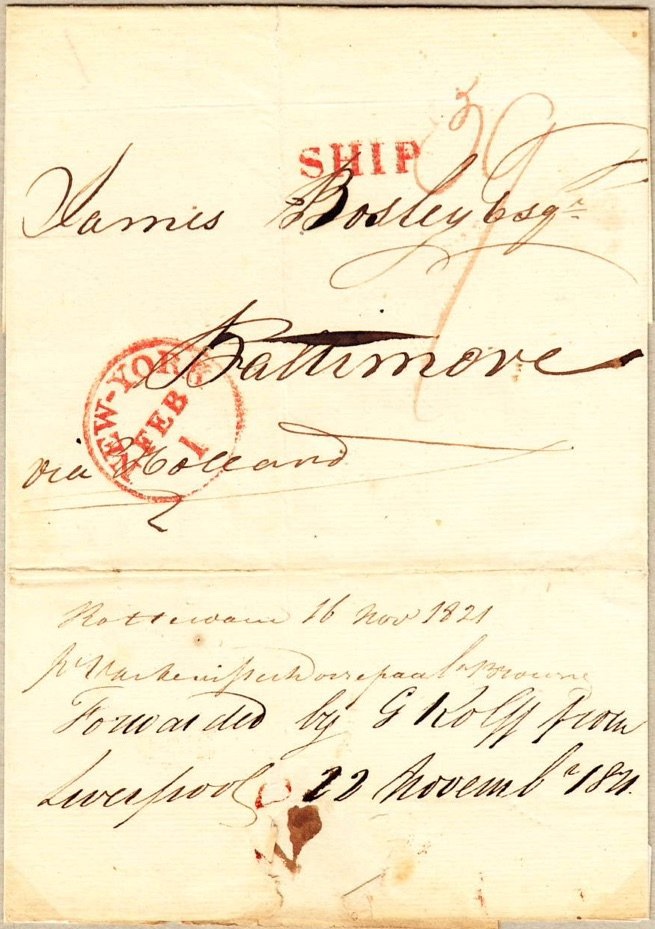 Thanks again for your assistance!

jwk
I was online for our Birthday Number 3!

No answer on the postmarks, but "Varkevisser, Dorrepaal & Browne" seems to have been a trading house (In 1819 they advertised the sale of "Chinese porcelain coffee- and cups and saucers"), they were a shipping company, and they were involved in the tea-trade.
https://www.marhisdata.nl/eigenaar&id=25848
As for the ship carrying the letter to Liverpool: I can only find the "English scoonership "Kattern" " sailing from Rotterdam to Liverpool around 18 november 1821.

The "Kattern" "in loading", "Rotterdamsche Courant", Thursday 15 November 1821 (via Delpher https://www.delpher.nl/nl/kranten )
Have yet to find the ship from Batavia to Rotterdam (the trip took some 3 months)
Top

Thanks a lot jwk!

I looked through the Delpher digitized newspapers yesterday, and made a note of American brig Java which left Batavia 17 July for Antwerp.I thought this was a likely candidate for the ship that carried from Batavia (I couldn't find any ships for Rotterdam around that date, but Antwerp is in the "neighborhood" right?). And then Kattern from Rotterdam to Liverpool.

Excellent. Still hoping to get a little help with the America side of things.
Collecting Netherlands Indies postal history 1818-1900
https://allanwestphall.com/stamp-collecting/
Top

jwk
I was online for our Birthday Number 3!

By replying to your post it gets to the top of the pile again, so really hope someone will see it and give you an answer re postal-rates and postmarks!

Antwerp is some 1,5 hours from Rotterdam these days, but back in 1821 they didn't have the A4 motorway, or several bridges, so don't think the letter ended up in Antwerp, and was then transported to Rotterdam.
Also, Antwerp was a port city, surely it had vessels leaving for Liverpool?

Anyway: have you considered the "English ship "Fort William" " for the Batavia-Rotterdam leg?
The Batavia postoffice on 28 july 1821 advertised this ship as one of three carrying mail to Rotterdam: "the "Pieter & Emma", the "Fort William", the "Bingham" 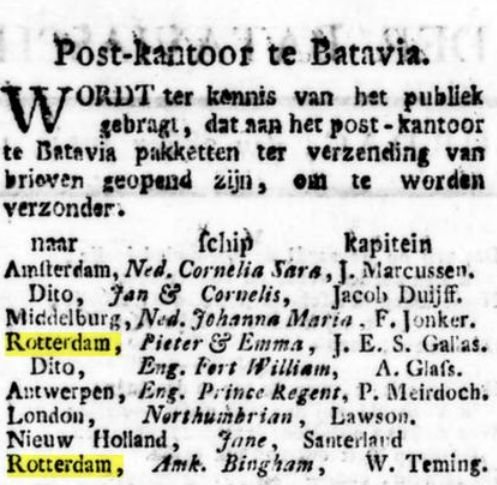 The "Pieter & Emma" was lost near Ascension on 29th October, so that's not the one. The "Bingham" I can't find anything about. (but why use an American ship for a letter to Baltimore "via Holland"?)
But the English "Fort William" sailed to Rotterdam, via Cape of Good Hope, on 12th August with passengers (and perhaps mail?) 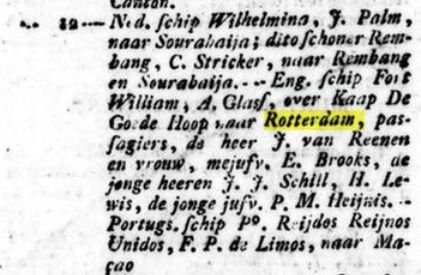 Dear JWK, I appreciate the work you do to help me. The English ship Fort William, captain Glass, is surely a candidate for Batavia-Rotterdam. But I am confused, in addition to the notes you supply that list Fort William bound for Rotterdam, there are other indications it was bound for England. 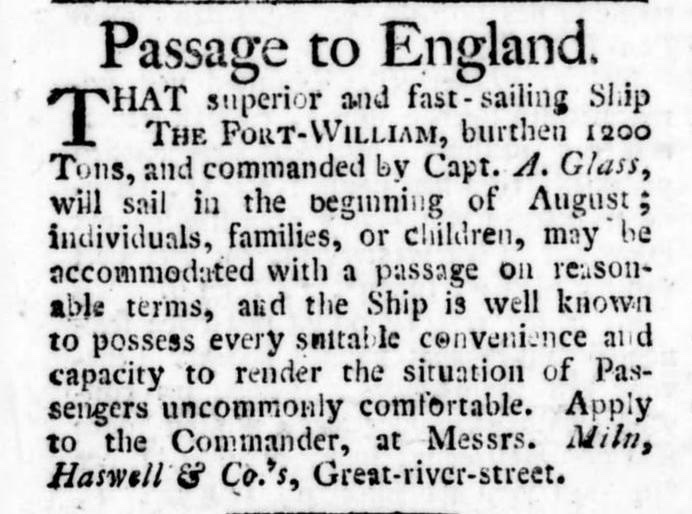 Or maybe it was the case, the Fort William went first to Rotterdam and thence to England?
Collecting Netherlands Indies postal history 1818-1900
https://allanwestphall.com/stamp-collecting/
Top
Post Reply
5 posts • Page 1 of 1