Doing a search for this cachet did not seem to explain the cachet, but did explain a little of what the CSOS did: perhaps monitoring all and sundry communications coming from China.

The airmail cover was franked with two 4d Tarr Steps Prehistoric issues and postmarked 2 JY 68; the rest of the postmark is indistinct. The return address indicates the cover was posted at a British Forces post office in Little Sai Wan, Hong Kong.

Any information about the cachet and rate appreciated.

Unrelated to the rate etc, but I work in that area.

It goes by it's fully Chinese name now, Siu Sai Wan--siu means 'small', sai wan means 'west bay'. This is all a bit confusing, as the area in question is actually in the far east end of HK Island. The idea for the naming was that there were two bays/harbours--so the western of the two became "west bay", and the other one, which is smaller, "little west bay". Nowadays, the Siu Sai Wan name remains, but the neighbouring area is called Chai Wan. But the far west end of HK Island (ie. Kennedy Town) is called in Chinese Sai Wan.

A bit of background on this military installation:


Siu Sai Wan was originally an intelligence gathering centre for the United Kingdom. In 1947, Britain, the United States, Australia, Canada and New Zealand signed an agreement to jointly pursue the gathering of intelligence. The British Armed Forces then set up an intelligence gathering centre in Siu Sai Wan, one of the largest in the Far East, to monitor wireless communications from the then Republic of China (ROC), present day People's Republic of China (PRC). In 1985, as the handover of Hong Kong to the PRC became inevitable, the centre was completely destroyed.


aerial photographs taken by the RAF in 1945 show that a military building existed at Little Sai Wan (Hong Kong) at that time and was fairly certainly of pre-war origin. It is now believed that this was a signals station operated by the Army, most probably the Royal Signals. However, an RAF Signals presence at the site in late 1941, comprising one officer, Flt Lt. Hector (Dolly) Gray, the Signals Officer from RAF Kai Tak and several other ranks is recorded in the diary of Squadron Leader Donald Hill

Based on the aerial photograph taken in 1945, it is believed that, during the period of the Japanese occupation, the site at Little Sai Wan was used by the Japanese for their own radio communications activities.

in 1945, 367 and 368 Wireless Units moved from Burma to Hong Kong, with operations and billets at Wang Fung Terrace, Tai Hang (Happy Valley)

the two units merged in 1946 to become 367 Signals Unit, and in late 1948, operations moved to Tai Po Tsai with billets at Kai Tak [Kai Tak is of course the old airport, Tai Po is in the New Territories up near the China border]

in 1950, the first members of the Royal Australian Air Force (RAAF) joined the unit with temporary billets at Lye Mun, [probably referring to Lei Yue Mun, in Shau Kei Wan, where there was a coastal defence base--now military museum--and also a government 'holiday village'] and in July 1951, operations began at Little Sai Wan alongside the existing unit at Tai Po Tsai, and billets were established at Cape Collinson [far, far eastern tip of HK Island, there's a lighthouse there, and a prison--wonderful sea view].

in 1952, 367SU linguists were operating from Batty's Belvedere atop The Peak, with billets at Lye Mun, but in the Spring of 1953, all billets moved to RAF Little Sai Wan

I didn't even know about the history of the area until I saw the return address on the cover here. I was actually at work today when I saw the thread, so sitting in the area it originated from, and that sent me off on the 'net doing a search for details. Small world.

Apparently it was decided in 1985, as part of the handover negotiations, that the listening station would be closed down. It was, then the buildings (it was a whole base really, a complex of small buildings) were used for various other things (fire services dept was one) then the whole place demolished. The area has many 1000s of residents now, several high-rise apartment estates all built in the late 80s-early 2000s. Was interesting to find out about the area (the wiki page for SSW is lacking).
Collecting Mongolia; Thailand; Indo-China; Mourning Covers; OHMS.
Top

Thanks for background. I saw a few pictures of Siu Sai Wan. I was a bit surprised by the height and size of the apartment towers. Surely a very different Hong Kong.

The second "S" in CSOS stands for "Station". My thanks to the Forces Postal History Society for the information and links.

Perhaps I missed this but what do the first three characters stand for ?
Top

A bit a googling around finds -

See about halfway down:

The military love their abbreviations & acronyms

Thanks for documenting that here.
Top

Re: 1968 RAAF Cover from Hong Kong Franked with British Stamps

And then there were two: 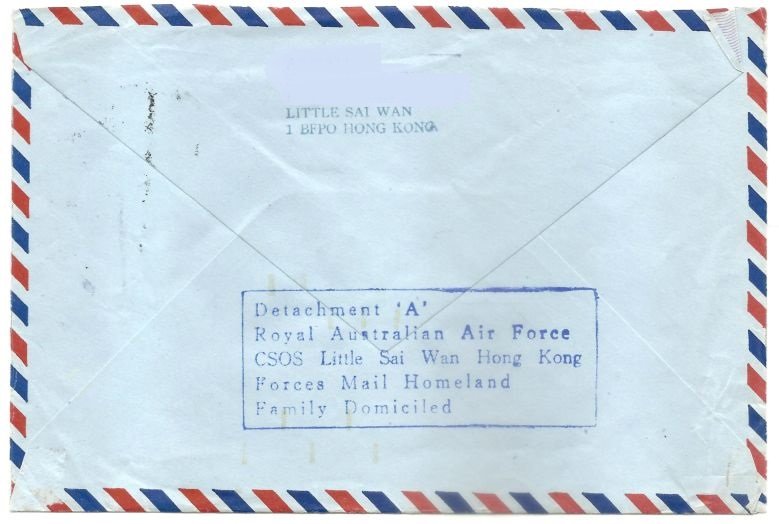 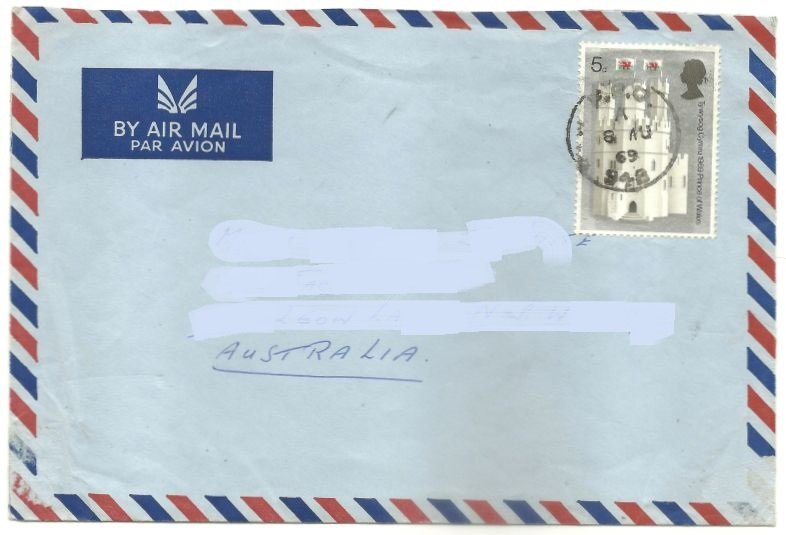 The cover is franked with a British 5d Investiture of the Prince of Wales and was mailed from Little Sai Wan, Hong Kong. It was postmarked on 6 AU 69 and mailed to Australia.

I am not sure why this airmail cover is franked with a 5d stamp, but the first cover with two 4d (8d) stamps. Perhaps a second step rate?