Handstamps on backs of old stamps. What is their meaning?

Re: Signed stamps. What is their significance?

Yes old time collectors liked to backstamp their covers - I have one backstamped by Vinnie Greene - he is a Toronto stamp legend in the mid fifties mainly - old time Toronto family and founder of the Greene Foundation - and a signatory of the roll of distinguished philatelists.

As far as contemporary collectors backstamping covers (you mention Ron Brigham) - I find this practice somewhat self-aggrandizing and don't think its a good thing for Philately to backstamp everything that passes through your ownership as a collector.

Even if you are Ron Brigham, a great Canadian Collector who formed the greatest collection of Canada and BNA ever to exist. (now being sold)

Yes backstamping and ownership marks should go the way of pinning up stamps with pins - we don't do it anymore. After all we have certificates with photo's to id and certify stamps now.
PaulBar
Top

Re: Signed stamps. What is their significance?

Here is an example of Vinnie Greene's backstamp as found stamped on a First Cents Consort Cover from 1863 that must have been in his personal collection.

Greene specialized in collecting postage stamps of Canada and the Canadian provinces and, in 1964, he and C. M. Jephcott and J. H. M. Young co-authored the book The Postal History of Nova Scotia and New Brunswick, 1754-1867.

Greene was very active in Canadian philately and was appointed chairman of CAPEX, the Canadian Philatelic Exposition, in 1951, 1978, and 1987. He participated in most of the major Canadian stamp societies, and international ones as well.

Greene signed the Roll of Distinguished Philatelists in 1963, received the Lichtenstein Medal in 1964. and was admitted to the American Philatelic Society Hall of Fame in 1989.

I enjoy having the privilege of caring for items that have been previously owned by well known and distinguished philatelists.

Re: Signatures on backs of old stamps. What is the significa

This badly defective stamp sold for about Over $A10 million. It has plenty of signatures!

1. Two impressions of Count Ferrary's famous ‘trefoil’ owner's mark.
2. A large faint "H" of American Billionaire Arthur Hind - said to have burnt a second copy sold to him. "It is now STILL unique".
3. A small "FK" of Finbar Kenny, the stamp manager at Macy's who brokered its sale by Hind's widow.
4. A small shooting star added by the Australian Gallipoli War Hero, Frederick Small, who owned it from 1940 to 1970.
5. A pencilled "IW" by Irwin Weinberg, head of a group of investors who bought the stamp in 1970 and sold it to du Pont.
6. A large pencilled "J E d P", initials of the late John E. DuPont who bought it for $US935,000 in 1980, and died in prison.
7. The large and ornate 17-pointed star has all the experts completely stumped.

Help with this Expertiser ID or name on NSW 9p stamp?

This New South Wales 9p has an expertiser mark "MA" on back upside down. As I understand it, an upside down expertisers mark identifies the stamp being a forgery.

Does anyone know this expertisers name? Also, can anyone identify the reason/s for labeling it as a forgery?

Stamp perfs measure 12.4 on all sides. The watermark is Crown over dbl. lined A inverted. Granted that the perf variety, watermark and cds may be the expertisers reason for a forgery but not knowing who the expertiser was/is or the reason for labeling it as a forgery, I wanted to seek other opinions on this stamp. Any help would be appreciated.

Re: Help with Expertiser ID on NSW 9p stamp

It is not an expertisers mark, it is an owners mark and the orientation of the mark is of no significance,

Re: Help with Expertiser ID on NSW 9p stamp

To add to David's correct info, the stamp and cds are of course 100% genuine, as this stamp was never forged.

The European Experts who inverted their handstamp to show forgeries did it PRECISELY, and placed it in the very corner of stamp.
.
Click HERE to see superb, RARE and unusual stamps, at FIXED low nett prices, high rez photos, and NO buyer fees etc!
Top

Re: Help with this Expertiser ID or name on NSW 9p stamp?

Thank you both, David and Glen. I have not seen very many stamps with owners or expertisiers marks to know the difference. I appreciate your help.

I have one last stamp with a mark on the back and request your help again. Is this the type of expertiser mark your are referring to Glen or is this another owners mark?

Re: Help with this Expertiser ID or name on NSW 9p stamp?

Actually, even if the expert mark is upside down, that doesn't necessarily mean that the stamp has been found to be a forgery.

The German expert body, the BPP, have all manner of fancy configurations for their expert marks. Stamps that have been found to be forgeries or have forged overprints etc. are usually marked FALSCH in the center.

This web-site also has a lot of information on experts and expert marks: https://www.filatelia.fi/experts/

Re: Signatures on backs of old stamps. What is the significa

Have merged several past threads on this subject, to give a very wide overview.

Aust Roo 5/- listed varieties - Whats on the back?

The below heavily marked 5/- Roo 3rd wmk, has an amazing 4 listed ACSC varieties!!

My question is whats the marking on the back? vS

Is it a dealers marking?

Does it effect its value and how do you determine CV with the four listed varieties? 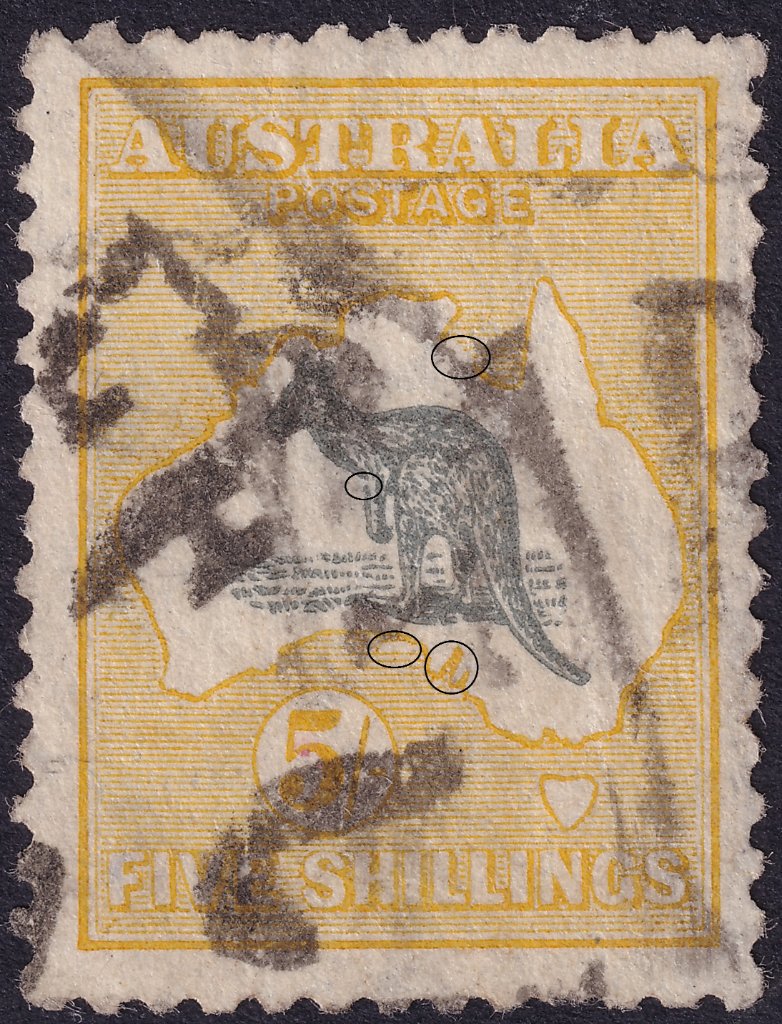 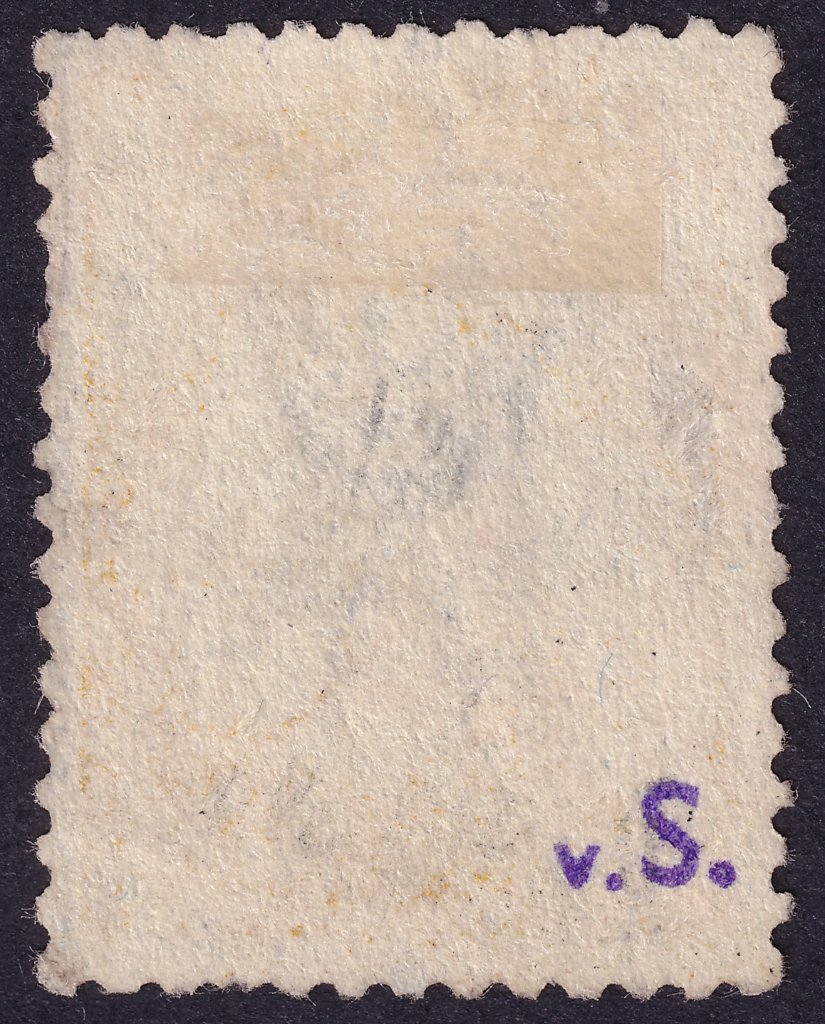 Provenance and Owner Markings page by Trish Kaufman. Mainly US area, but not exclusively so:

Hello everybody. Seems like a good time to bump this really interesting Stampboards thread. Here is a montage made from back scans of ten classic stamps, all except one from the 1850s, mostly New South Wales Laureates. These details show a number of very small marks, the majority being handstamps. 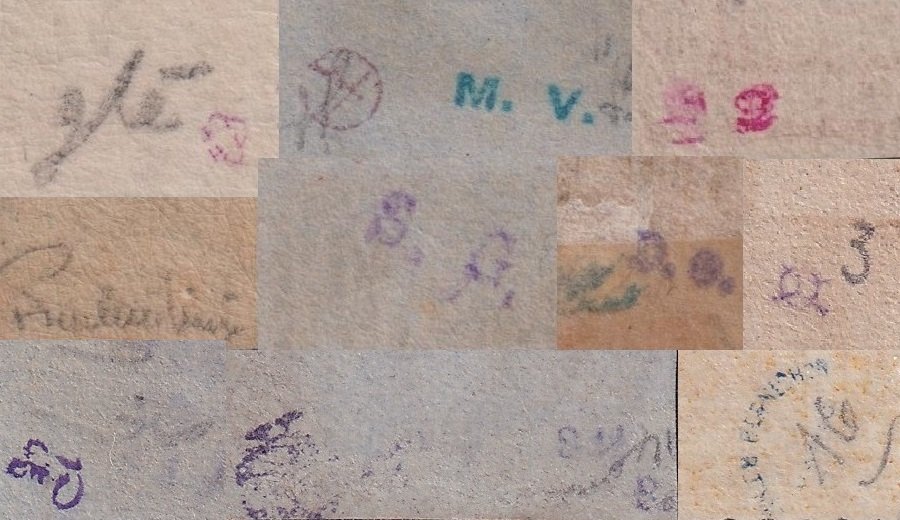 Over to you. Are these all owner-marks, or are some of them expert marks? Does anybody recognise any of these marks? Just wondering! Cheers, Tod.

Thanks Glen, that is what I had thought. At least none of them has been ravaged like the One Cent Magenta!

Users browsing this forum: No registered users and 9 guests