.
A rather cool piece I found buried in a stockroom today.

If anyone knows a serious collector of Imperf Tasmania on cover by all means please send them this thread for interest.

If nothing else it records my research today for posterity.

Not quite sure what to ask - low 4 figures probably, given the $5000 USA asking price. 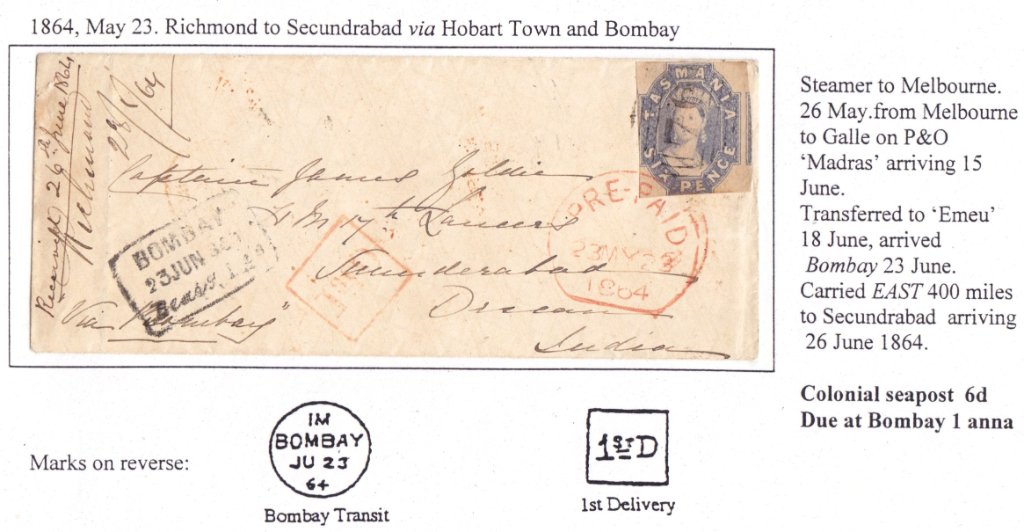 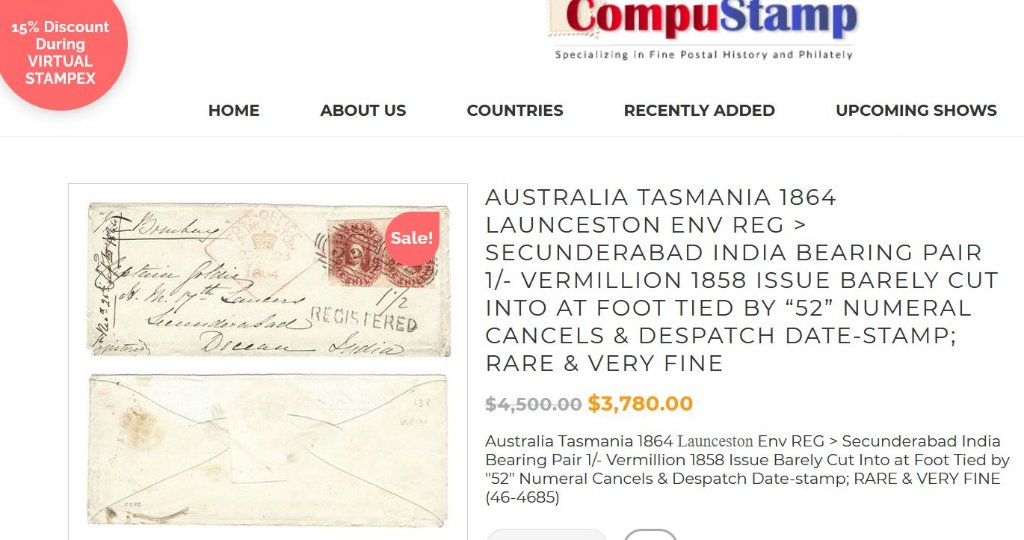 Rare early 1864 Tasmania cover Richmond to Secundrabad with imperf 6d Chalon: A VERY early cover from the fledgling Colony, whose first stamps had only been issued 10 years earlier, and few were used anywhere overseas, except to UK of course. Have never seen one to INDIA. 1863 6d Grey Violet imperf Chalon, sound, with bright colour, and cut square, with good portion of adjoining stamp at right. Tied by a lovely sharp numeral strike ‘76’ of Richmond, tied as well with a superb strike of the red Tombstone “PRE-PAID - 23 MY :64”.

To ‘Captain (Later Major, and Colonel) James Goldie, H.M. 17th Lancers, Secundrabad, Deccan, India. Goldie was recommended for a Victoria Cross by his CO in India, after a report by an independent Board of Officers. (Goldie’s father, Andrew was also a Colonel and was murdered in the Mutiny in India at Cawnpore, along with his mother, and rest of family.)

Crisp circular red backstamp Bombay arrival June 24 - 1864 and arrival cds of Secundrabad in central India on reverse of June 26. SG 46 cat “From £425-$A850” on cover. EXCELLENT condition for 157 years old from this tiny colony. I have had this buried on my desk for 10 or 20 years - no idea where it came from, except it was exhibited by someone, who also had not researched the recipient.

I can see another near exact cover for sale right now in the USA - identical strange size envelope, exact same handwriting, posted 3 months later to Goldie, offered ‘STAMPEX discounted’ for a mere $US3,780 = $A5,100 - www.tinyurl.com/India1864 That cover has cut into 1/- value of this set, with back flap totally missing - mine is very neatly opened, and fully intact.

The seller has also done no research, and has not ID’d the recipient, or his importance in the British Military. A fine piece for a Tasmania early covers collection, or an Indian one, or a Military one. (Stock 612EV)

Pedestrian covers to UK with 6d imperfs are $1000 these days.

.
Nothing more our Tassie experts can add? 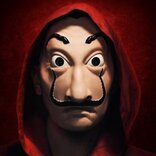 To ‘Captain (Later Major, and Colonel) James Goldie, H.M. 17th Lancers, Secundrabad, Deccan, India. Goldie was recommended for a Victoria Cross by his CO in India, after a report by an independent Board of Officers. (Goldie’s father, Andrew was also a Colonel and was murdered in the Mutiny in India at Cawnpore, along with his mother, and rest of family.)


Just another piece of info, the Indian Mutiny / Revolt of 1857 is also known as the First War of Independence ...The rebellion was crushed in 1858 but was the end of the East India Company rule in India. The ruling powers were then shifted to the British Crown, making Queen Victoria the 'Empress of India' in 1877.
Collecting Interest: Cricket; India: Flags on stamps,
Cyprus: Obligatory Refugee Fund Tax
Top

I am not going to class myself as an expert but I can add that mail from Tas to India during this period was not unknown by any means. Military personnel were regularly transferred from Tas to India and connections, therefore, made between the two colonies.

I see this destination from time to time and have a few covers in my collection.

Coard who engraved the Courier stamps went from Hobart to India seeking his fortune in the great "survey" of India.

The big difference between the 6d cover and the 2/- cover is that fact the 2/- is a Registered cover which is extremely scarce from this period. A Registered cover to Inda with the 2/- rate may be unique.