Many members here are probably familiar with the UK's wavy line handstamps which were introduced in 2015 in an attempt to limit pen-cancelled stamps.


norvic wrote: ↑
13 Apr 2015 23:20
Ladies and Gentlemen, Royal Mail Delivery Offices will soon be phasing out the biro - at least for cancelling stamps.

According to a couple of sources, including My Royal Mail, a new device will be rolled out to offices across the country after trials and selection in Banbury.

The device shown appears to be a self-inking wavy-line handstamp which, while not ideal, is better by far than the ball-point pen.

Could someone explain how and when these are used please? In one of Norvic's blogs it was stated that they are applied at delivery offices and/or mail centres - but are they meant to cancel mail sent within the UK only, or also international mail?

I have occasionally received mail from the UK with stamps cancelled with one of these handstamps: 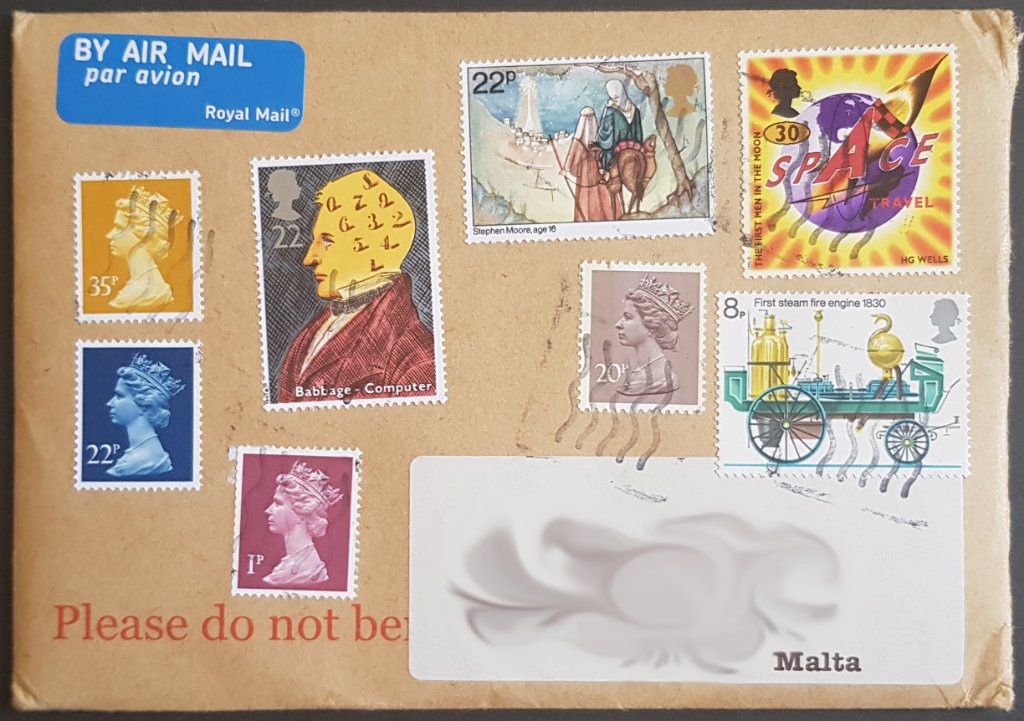 Are they only meant to cancel UK stamps, or are they also used to cancel foreign stamps on incoming mail?

Some time ago I found one of these postmarks on a Malta stamp from 2014 - is this normal or would it be contrary to some regulations? 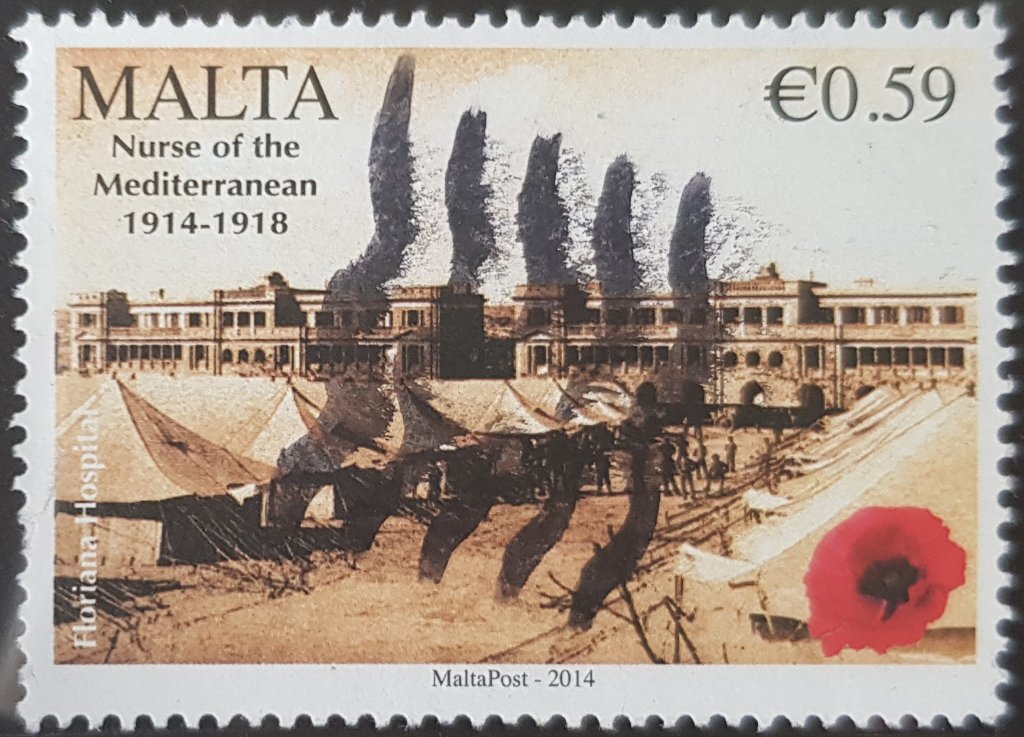 Mods - if there's another thread which deals with these handstamps feel free to merge my post.
Collecting worldwide postage and revenue stamps - focusing on Malta, British Commonwealth and revenues in general
Top

No reason why it should only be applied to inland mail so I’m not surprised to find it in international mail.

Given that our people have trouble identifying our stamps, and being zealous in some cases about revenue protection anything is possible.

I know of no regulation UPU or otherwise which prevents uncancelled Mail being marked in the destination country.
Ian Billings - Norvic Philatelics - Remember almost everything I picture is available, unless otherwise stated or copied from elsewhere, as I reduce a roomful of 'stuff' - just ask. GB stamps info: https://blog.norphil.co.uk, NPhilatelics on twitter, www norphil.co.uk, shop.norphil.co.uk for our e-commerce site
Top

When these were introduced I thought I had read somewhere that these were intended for inbound mail (hence my question) but I could well be mistaken. I have received mail with these cancellations several times in the last couple of years, so their use on international mail is definitely not an uncommon occurrence.

The Malta stamp shown above is the only time I have seen one of these handstamps on a non-UK stamp (so far) - if any UK members have others from incoming mail it would be interesting to see them here.
Collecting worldwide postage and revenue stamps - focusing on Malta, British Commonwealth and revenues in general
Top

HalfpennyYellow wrote: ↑
21 Sep 2021 02:15
When these were introduced I thought I had read somewhere that these were intended for inbound mail


Well, that's certainly my understanding of early press releases too, but it doesn't seem to have panned out that way.

(Norvic, these are anecdotal comments, made after enquiries with post people, both on their rounds, and in a sorting centre. I look forward to it being updated / corrected by your knowledge!!)

I think the vision was to give it to last leg post people, so that they could cancel anything "about to be delivered in an unmarked way".

However, the wavy line device as issued (or not issued - post delivery people in Yorkshire never got the stamp, just the training!!) was totally unsuitable for purpose, and the unions objected.

My notes (not official)

1) The stamp consisted of two parts, being a trodat stamper, and a plastic end cap. This is totally impractical in use when out on the rounds, when one arm is usually stuffed with deliverables (and juggling classes are very time consuming).

2) The stamp itself was prone to drying out, almost everywhere except on the impression made, where it took several minutes to dry).

3) The unions did not want their staff to carry anything other than "minimum devices, for delivery of mail".

4) It was perceived that this was "to sweep up sloppiness, earlier in the process" (my turn of phrase), as the collection and cancellation are natural steps prior to outbound dispatch.

(As noted above .. Most of the trodat stamps (in my area) were never issued / collected).


As I understand the current "rough process" :

All machineable stuff (letters) is cancelled by machines.

Only the non machineable stuff, large letters, special services, exceptions (too many stamps, not in line with canceller), would be diverted to the manual handling section, for postal charge assessment, cancellation, and revenue protection activities. All under tremendous time pressure.

All the stuff from overseas, which should have already been cancelled there, is also reviewed for charges, mint stamps etc, and treated accordingly.

What leaves outbound is mail ready to be sorted and delivered.

At the inbound centres, they are "from sack, to letterbox".
They read charge dockets, and issue calling cards appropriately, but do not cancel stamps, nor collect cash for shortfalls.


You can see why the outbound centres didn't like them either, here .... 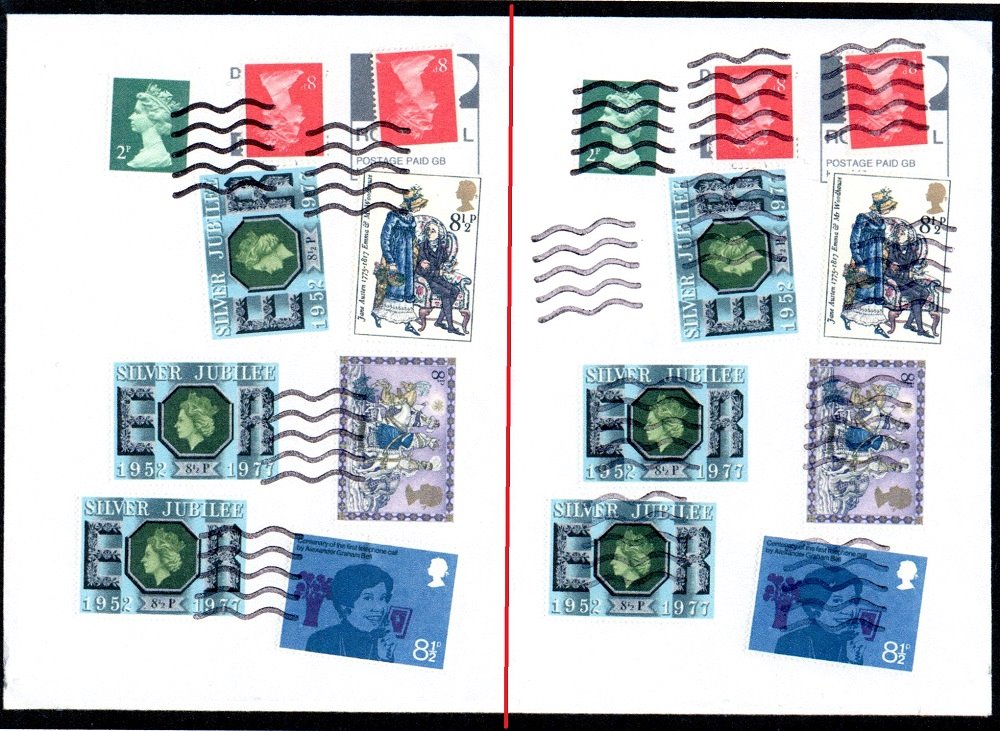 The left line would be an ideal cancel, from a collectors point of view (assuming wavy was the only option), but the right set was how it was mandated in use - EVERY STAMP, and with multiple strikes in a very short space of time, totally unsuitable for high volume usage on a self inking pad.

Hence people reverted to what works best, being heavy markers in the outbound centres, and biros on the last leg (A standard tool for a post person, so no union issues).

I do see some residual use, mostly on large envelopes, possibly twice a year (or so).

They were widely available on ebay (about a year ago) "as issued", guide price £3 delivered, though less common nowadays.

I can whack it on any stamp you send me, but at present, the only time it gets usage (other than the illustration above) is when I receive forged stamps, where they are neatly cancelled down the right margin. 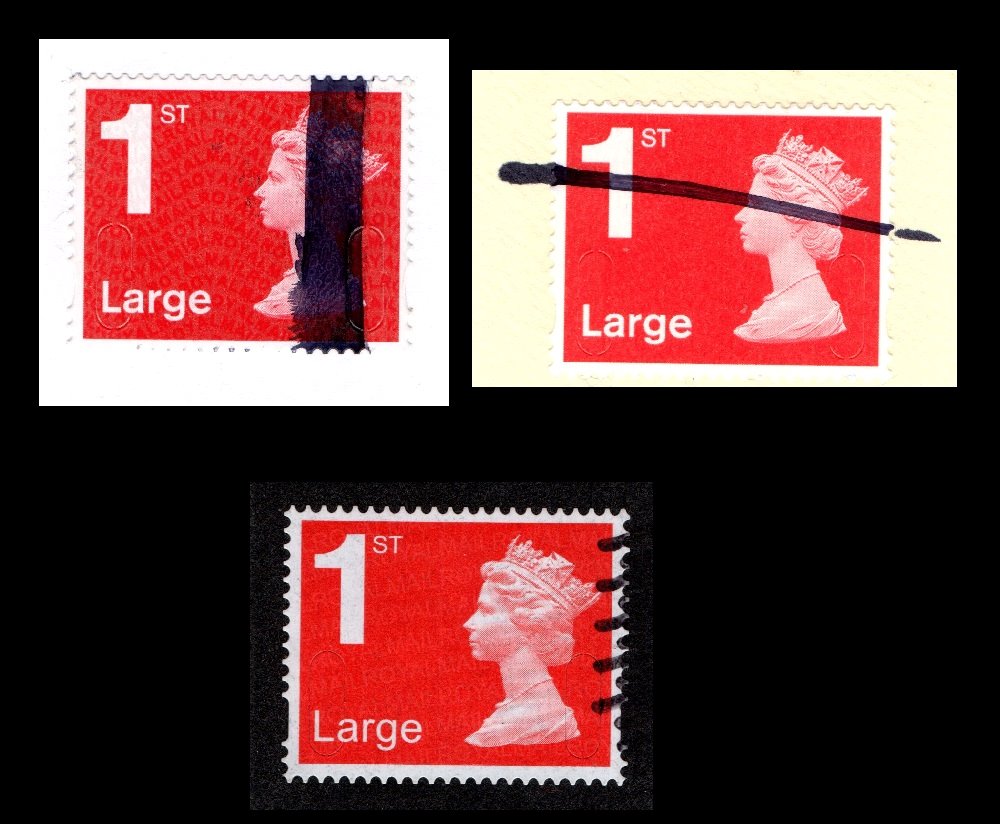 Its a bit of postal history, but so easy to replicate with original equipment that, unless on cover (and then only "possibly"), its virtually worthless.
Top

They are gross, but maybe a little better than a biro or texta.