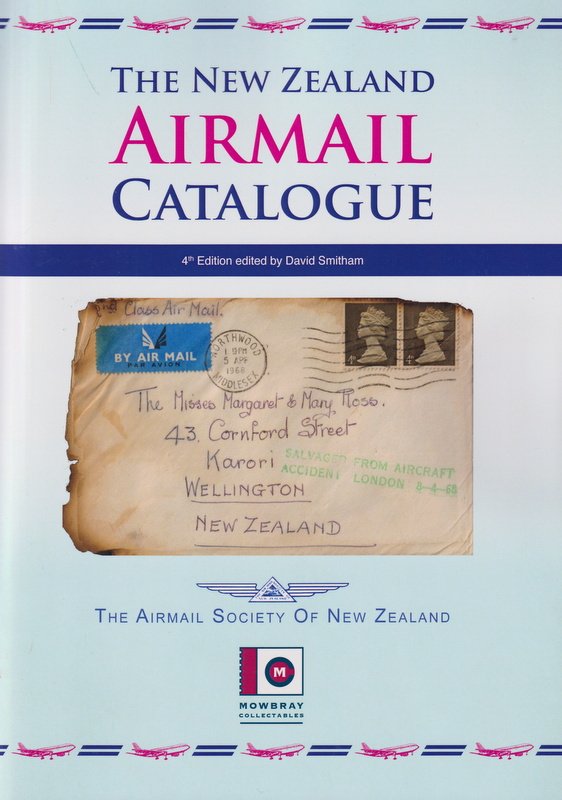 The 4th edition of the New Zealand Airmail Catalogue has just been published.

All illustrations are now in colour, and priced listings up to and including 2019 are included. Owing to coronavirus, there were no specific New Zealand airmail flights in 2020.

The 3rd edition catalogue (published in 2009) has been thoroughly overhauled. Not only are there entries listed since the previous edition, but numerous, previously unlisted, flights are also included in this edition. This includes a large number of interrupted flights, about which more is now known. Also, a number of previously listed "flight" covers were deleted, they could not be flight covers if they were not flown!

A major overhaul of the previously almost incomprehensible listings of NZ-Pacific islands World War II flights was made. These entries now include examples of the postmarks used by the NZ troops stationed in the Pacific and are thus readily identifiable on flown mail.

A separate section includes a check list of Antarctic flights, which are in turn referred to in the main body of the catalogue.

Assistance from many sources, collectors, Stampboards members, dealers and the internet were gratefully accepted in compiling this edition, and as with any new reference work: as soon as it is published it is unfortunate that an item turns up that is not mentioned!

Prices (in New Zealand currency) of many flight covers were also thoroughly overhauled, although it is fair to say that not many alterations have been made from circa 1960.

Orders for this 100 page, A4 size catalogue should be directed to Brendan: retail@mowbrays.co.nz

Looks good David, I must get a copy.

Pity with the NZ borders now closed that we on the other side of the ditch won’t be able to get to Royalpex in early September.

Still the exhibition will still proceed which is the main thing.
Tony
"A cancelled stamp tells part of the story, a cover tells it all"
Top

David .. are Mowbray's mailing then free to members, or is there some cost of some kind involved?