An exciting new discovery was found at Sammy Stamps (Charity) in Brighton recently
Dare I say a unique block of 4 of the Wing Commander GOBLE label.

I was sorting through a box of tat and chanced upon the block and my spidie senses were tingling. After a little research I found that the previous known multiple was a pair and a complete tete beche block unknown.

The block was sent to Abacus Auctions in Melbourne and they concurred with my opinion re scarcity.

AUSTRALIA - Aerophilately & Flight Covers
1924 Pals poster stamp of Wing Commander Goble Frommer 12a in greenish blue complete sheetlet of 4 comprising two tete-beche pairs, exceptional centring, some faint toning, minor perf separation/reinforcing in the margins but the stamps with full unmounted o.g., Cat $800++ for a pair, which Tom Frommer states is the largest recorded multiple of any of these poster stamps. He was not aware of the tet-beche format. [These labels were not intended for postal use & no used examples or covers are recorded] ** The sale of this lot will support a local charity **

Wing Commander (later Air Vice-Marshal) Stanley James Goble served during WWI on the Western Front where he was credited with 10 kills. After the war he held senior posts in the RAAF & was three times Chief of the Air Staff. 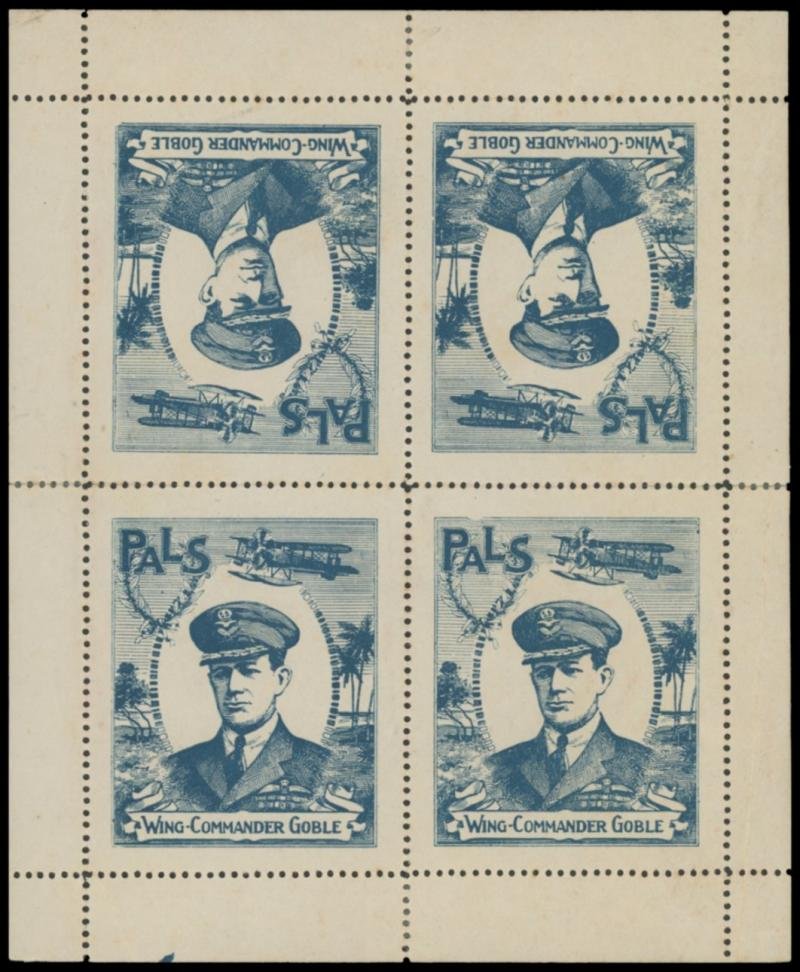 We sleep safe in our beds because rough men stand ready in the night to visit violence on those who would do us harm.
Top

.
$380 is an absurd low start price estimate for a unique MUH block - hope the charity does not get stiffed here?

I'd have offered double that, cash money, same day, no fees.

Abacus get dreadfully low prices for many things in the past year. All rivers of profit for them at 30%-40% of every item, skimmed off by them, no matter how poor the prices, but often a disaster for vendors.

The Tete-Bech Gobles block sold on Thursday for a reasonable $1500 hammer price so about $1800 invoiced to the lucky buyer.

We sleep safe in our beds because rough men stand ready in the night to visit violence on those who would do us harm.
Top

A nice sold price Paul for a rare item. Must have been a few bids on it to get to that hammer price.
Tony
"A cancelled stamp tells part of the story, a cover tells it all"
Top

Yes there was a lot of interest in it. The bids were flying.
Top

Great result for the charity. good to see new discoveries are still out there!
Top
Post Reply
6 posts • Page 1 of 1