Please list anything spare you have for sale. It MUST have a scan/s and a FIXED price. You MUST have at least 30 posts and 30 days membership on this board to list an item for sale, or your listing **will** be removed. 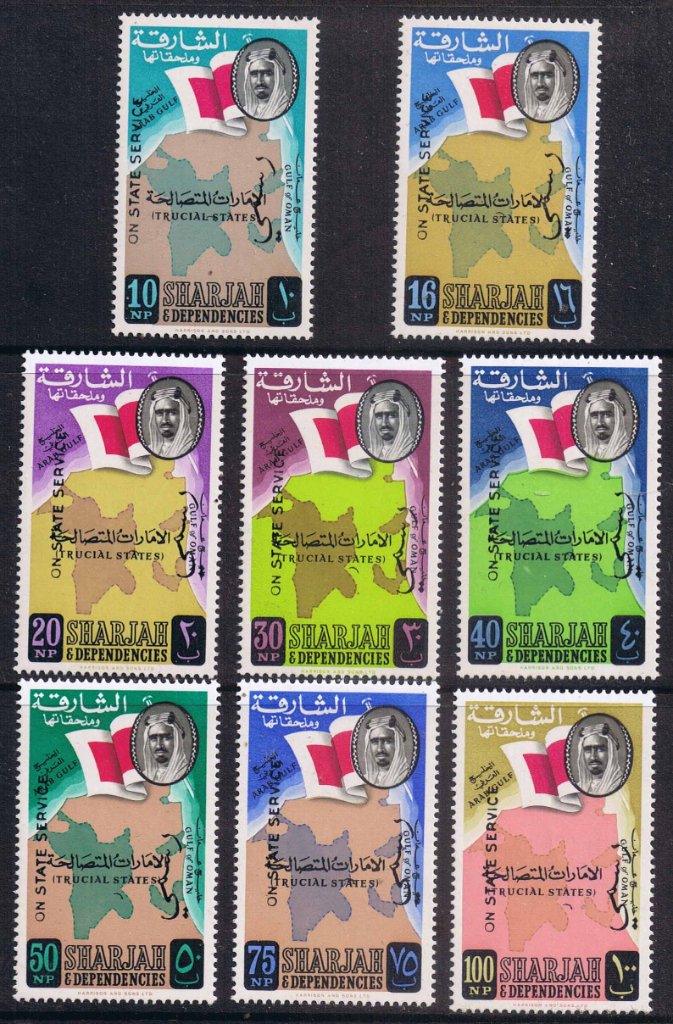 The Emirate of Sharjah is one of the emirates of the United Arab Emirates, which covers 2,590 square kilometres and has a population of over 1,400,000 (2015). Prior to the establishment of the UAE in 1971, it issued its own stamps, which are seldom seen today.

This set appeared in 1966 after the British-sponsored Coup that threw out Sheikh Saqr as ruler. The stamps nonetheless show the visage of the ex-ruler, Sheikh Saqr, being overprints on the first definitive of 1963.

Mint previously hinged, and in tidy, clean condition. This is the almost-complete set (missing only the lowest value, 8 n.p.) They have been hinged (as that was the "normal thing" at the time), but there are no hinge remnants and only faint reflections showing where hinges once were, so at first these appear as unhinged mint. No trace of rust or toning either.

Saqr was the eldest son of Sultan bin Saqr Al Qasimi II, who ruled 1924-51. After Sultan's death, Saqr became the ruler. Saqr was an Arab nationalist, which undermined the British Empire's control of the Trucial States. In 1964, he supported the opening of an Arab League office in Sharjah, after a visit by an Arab League delegation lead by Abdul Khalek Hassouna, the Secretary-General at the time. The British viewed this move as a threat, which lead the British administration to intervene and initiate the ouster of Saqr as the ruler Sharjah. In 1965, Glencairn Paul, the British Political Agent in Dubai, was tasked to inform Saqr of his deposition. Saqr was then exiled to Bahrain and eventually Cairo. His cousin, Khalid bin Mohammed Al Qasimi succeeded him.

On 24 January 1972, following soon after the creation of the United Arab Emirates on 2 December 1971, Saqr returned to Sharjah from Egypt with a number of mercenaries and seized power in an attempted coup. The group invested the Ruler's palace at approximately 2.30 pm, with reports of gunfire and grenade explosions within the palace. Besieged by the Union Defence Force, which arrived an hour later, Saqr finally gave himself up in the early hours of 25 January to UAE Minister of Defence, Sheikh Mohammed bin Rashid Al Maktoum. However, Khalid was killed in the action.