Hi, I've been offered this and think it looks (in addition to being a bit beat up) like a really bad forgery of the 1864 Bremen 3 Gr stamp -- but I'm also very new to Bremen stamps and don't really know what I'm talking about: 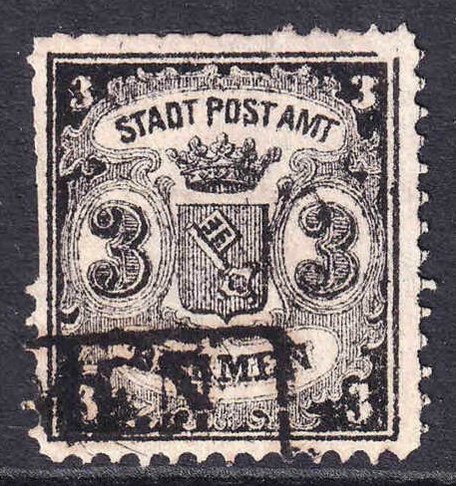 Hard to judge the color (there are two varieties, I believe, but both are supposed to be on blue paper).

The small '3's in the corner look badly rendered compared to the few genuine examples I've seen online, and I think it's supposed to be rouletted 16, while this looks perforated (something like 14x15).

I also don't know what the deal is with the gap in the outer border in the upper right-hand corner -- I haven't seen that on the genuine examples (though it could just be damage to the surface).

From what I've read, a major distinction between the two varieties is the number of vertical lines (1 or 2) in the small central oval below the word "BREMEN." Here I can't tall anything!


All of this would seem to add up to a horrible forgery -- except I may just be completely unaware of a genuine, rough-and-tumble variant. Does anyone with familiarity with these early Bremen stamps and their forgeries have any insight?

Bachius
Well on the way to 25 post Senior Member

Greetings, do not doubt it is totally false. A bad copy made with a cheap printer. I show you an authentic one. 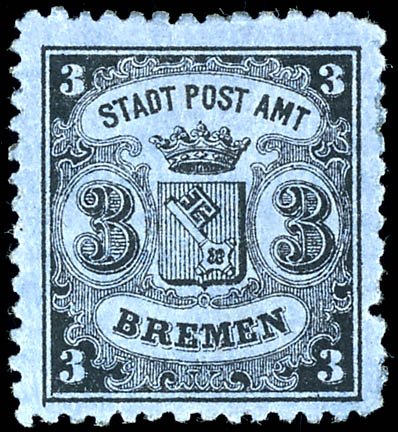 Classic stamps of the world until 1940. Spain and Italy. Basic stamps.
Top

Bachius beat me to it with a much nicer exhibit

,
but I also looked up a bit of the background, for your information.

The one you show is currently listed on eBay by Rogernorth stamps, El Paso, Texas 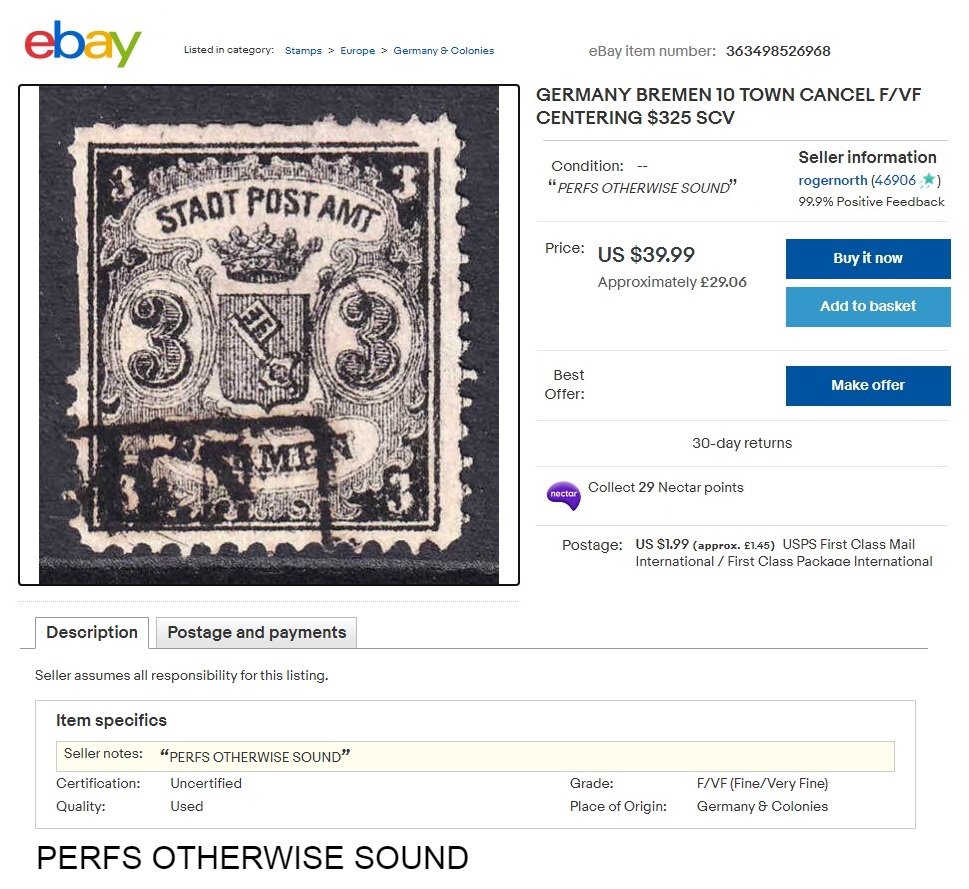 Perfs Otherwise Sound? I think not .....

What you are looking at is a classic forgery of a Scott #10, perf 13, with two sides heavily cut into, surface abrasions top right. No way is it "Fine / Very Fine"

Look at the fine design detail of a real one alongside the forgery .... 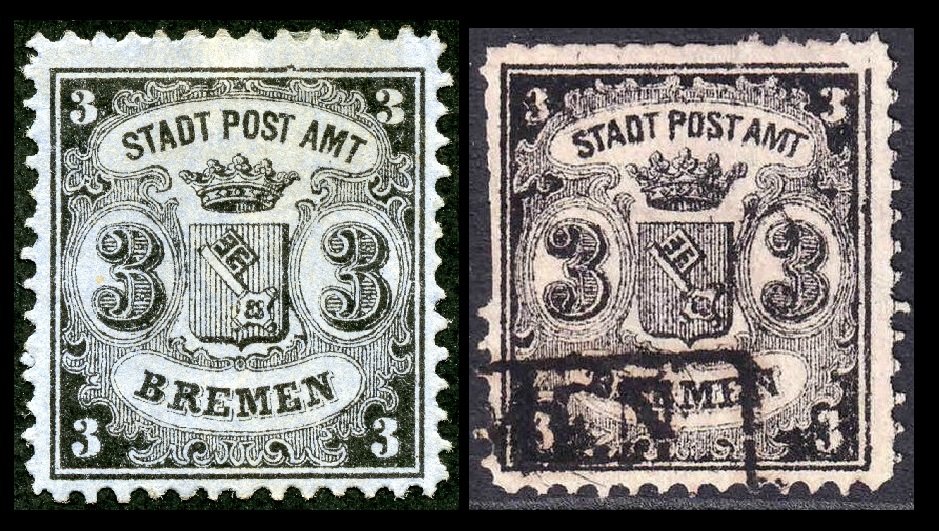 Real vs Fake. Look at the central key "Bit and Wards"


"Album Weeds and How to Spot Them (Serrane) has a useful guide to the differences ..... 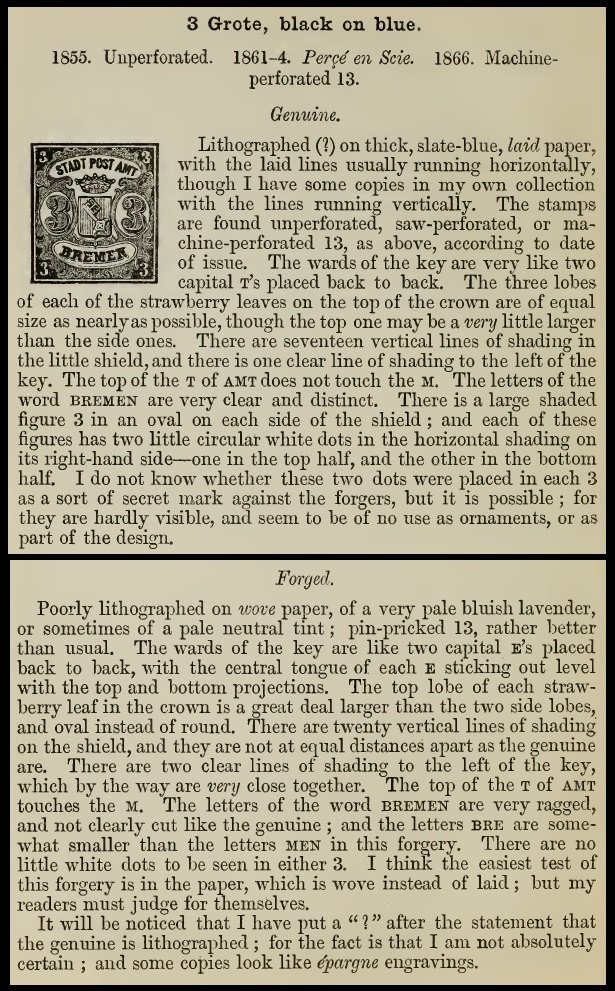 (Someone should probably bring it to rogernorths attention, as generally he's far better than this listing would suggest).

Bet you are glad you asked, now

(Someone should probably bring it to rogernorths attention, as generally he's far better than this listing would suggest).


Really? Just last evening I was looking at his numerous listings of Nazi overprints that seemed to be printed with a computer & printer. Hundreds of them. 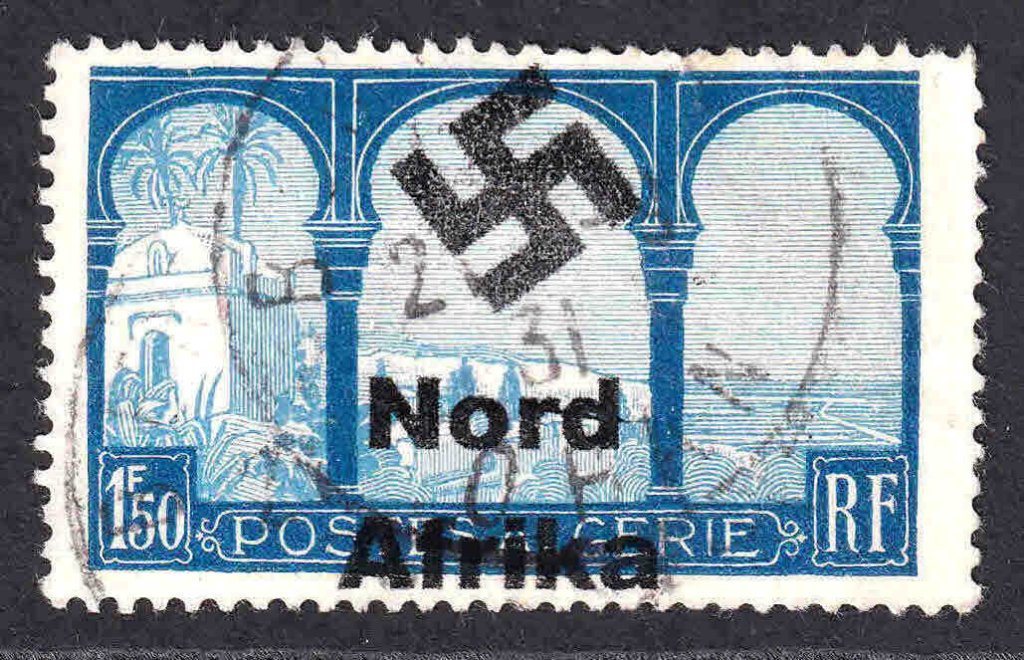 postmarked in 1931, he must have known it was fake,

Why would anyone sane ever consider paying over 10% of cat for a mid-level German states item that was GENUINE and SOUND - not one with chunks missing????

And from ebay rogernorth seller offering all kinds of other fake material?

A Blind Nun from 20 paces can see it is a crude fake.

You can buy SOUND and GENUINE copies for that price from REAL dealers in Germany, who GUARANTEE the item.

I know you do not get a precious ebay positive feedback that way, but you DO buy the Real Deal.

Now I feel oddly defensive for asking the question in the first place -- like I have to spell out in block letters that I wasn't seriously considering purchasing this stamp by the time I posted, as I doubted that it was genuine and recognized its poor condition, and stated this in my post. But I'm as yet ignorant of this specialized collecting area and am still gathering resources.


And I am deeply appreciative of the patient help I've received each time I've posted. With each measured and sincere (and typically deeply knowledgeable, typically not ad hominem) response, I've learned about new resources and have not needed to ask the next twenty or thirty questions that occur to me, because I've learned how to find the information on my own.

I am a person who is very skilled and experienced in some areas of my life, and very unskilled and inexperienced in stamp collecting, and well aware of it. I'm really enjoying the space to grow that being ignorant-but-curious affords. It is kind of people on this site to foster and indulge that curiosity in this thread.

Stepping beyond a binary determination of real / fake in this one instance, I am interested in learning more about Old German states forgeries and how to recognize them. Bremen seems like a challenge! I'd quickly read on this site -- http://forgeries.info/countries/bremen.php -- about distinctions between the genuine and forged varieties of the 1855 Bremen 3 Gr -- but hadn't (and haven't) mastered the distinctions between the heap of *genuine* 1855s, 1863s (or is it 1864s), and 1866-67s, let alone their well-known forged versions... let alone whatever modern scanning and laser printing can devise.

As a starting point, clearly I would benefit from spending a little time with Album Weeds.


And as a quick follow-up on this particular forgery -- does one assume that the postmark is also forged? That is, the intended purpose was to perpetrate a fraud on early stamp collectors? Or was the purpose to defraud the Bremen postal service -- so that the forgery could potentially have been used postally?

Seems hard to imagine that this stamp would pass muster with a sharp-eyed postmaster... 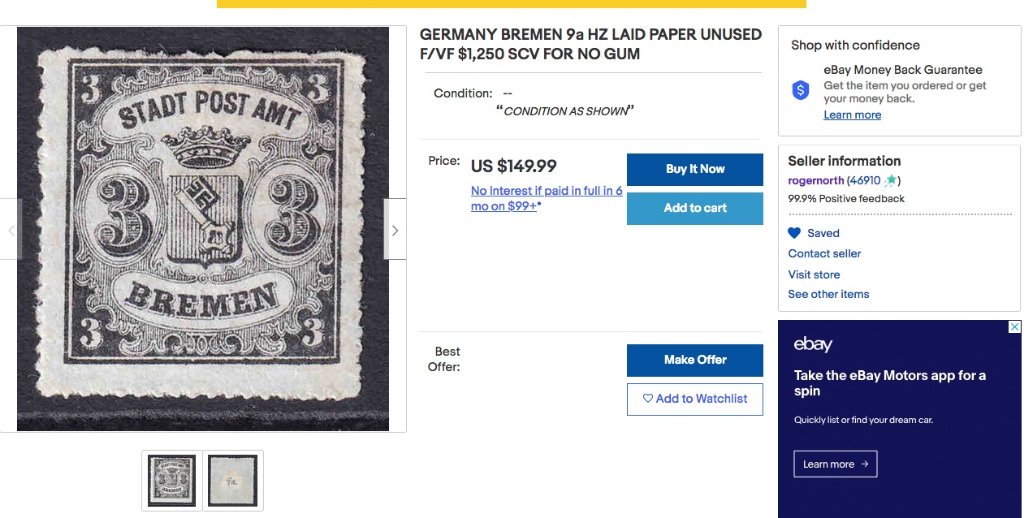 Could this be what Album Weeds ( http://stampforgeries.com/album-weeds-bremen/ ) calls the "Second Forgery"?


This is an extremely nice-looking counterfeit, and I fancy it has had a large sale. It is probably quite modern, as I do not remember seeing it until after the second edition of this book was published (1892). Very well lithographed, on blue laid paper. All my specimens have the laid lines horizontal. It is copied from Type II. The stamps may be found imperforate, percé en scie, or perf. 125. The little oval, below the first stroke of the M of BREMEN, containing the two vertical lines, is quite closed. There is no black dot above the point of the central trefoil of the crown. The central jewel on the base of the crown is a perfectly circular pearl. The corner-point of the key touches the center of the top outline of the shield, as in the genuine Type II.; but there are only seven of the vertical lines of the shield (counting the thin left-hand outline) to be seen to left of this point, reckoning along the top line of the shield. In the genuine Type II., eight lines can be seen. None of these lines project above the top of the shield. The shaded bottom point of the shield is only slightly to the right of the center of the little circular ornament below it. The ring round the barrel of the key is decidedly wider than the corresponding rings round the projecting knobs of the handle; though they are all of equal width in the genuine stamps of all three types. There is one easy test in the little black outlines, below the letters of the word BREMEN. In the genuine Type II., there is one of these lines (like an _|) under the right foot of the M, another similar but longer one under the whole of the E, another similar one under the left foot of the N, and one (shaped like a _|) beginning under the right foot of the N. These are all quite separate from one another in the genuine. In this forgery all these lines run together into one unbroken piece.

If I'm not mistaken, most of that seems to hit the mark...
Top

And sorry I did not say this explicitly before, but thank you, Bachius, for the excellent example, and to ViccyVFU for the further context.
Top


And as a quick follow-up on this particular forgery -- does one assume that the postmark is also forged? That is, the intended purpose was to perpetrate a fraud on early stamp collectors? Or was the purpose to defraud the Bremen postal service -- so that the forgery could potentially have been used postally?


Many early stamps are have a higher catalog value as used stamps. If you are going to forge such a stamp, you might as well forge the cancellation too since that would make it even more valuable to a collector. Besides, if you forge a used stamp, you can't be open to the charge of trying to defraud the post office.

About this seller: Many years ago, there use to be a reputable dealer by that name (at least back then I thought he was reputable). Is this the same dealer? Or someone else with the same name? I do not know.
Top

AdmiralCollector wrote: ↑
03 Sep 2021 02:38
About this seller: Many years ago, there use to be a reputable dealer by that name (at least back then I thought he was reputable). Is this the same dealer? Or someone else with the same name? I do not know.

I have to hold my hand up and admit mine was a bit of sloppy follow on comment .... Seeing 45000 feedback, and just one neg for forgery, I only looked at a few GB offerings (Where I know my way about).
Pricy and poor quality, for sure, but I don't know what the US market buys.

When you look at his overprint offerings, well, on face value, they seem pretty, but appalling .... 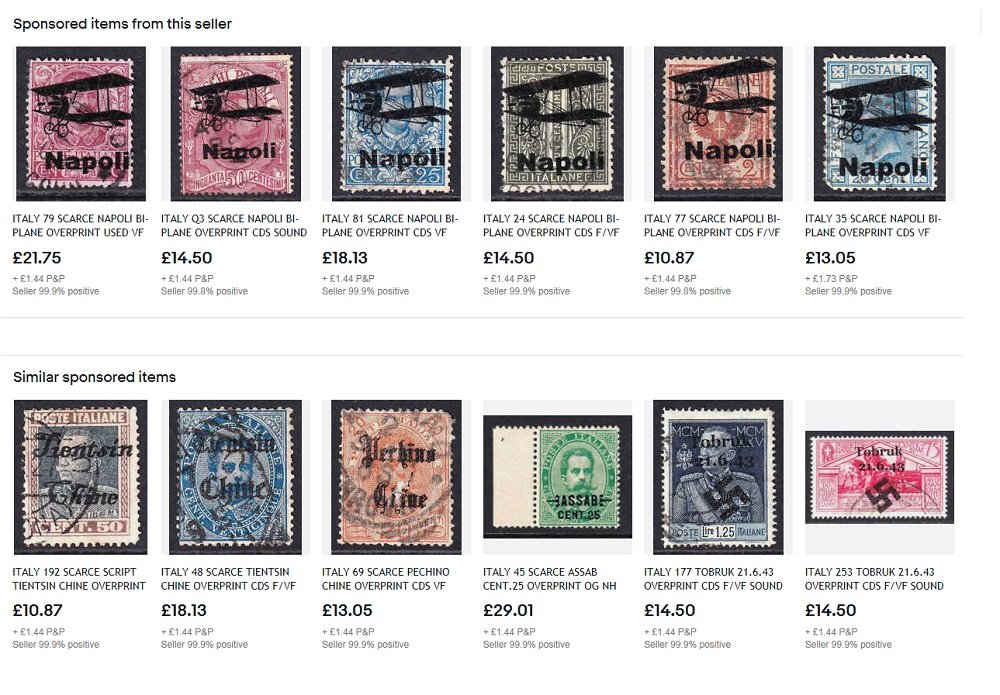 I'm wondering if her has one of those eBay "stamp on all negs, as unfair" vouchers, that they sometimes grant to powersellers?

And where's the PSE .... Oh yeah, they don't look at overprints, ripped corners or forged postmarks ... just even-ness of margins.

As for the OP regretting asking ... never feel like that. It was a good and clear question, nicely illustrated, and you'll find (over time) we all have our different styles of answering it.

Each and every reply "dedicated to saving you $40", and discouraging anyone that follows in your footsteps "thinking this was a good deal".
Top
Post Reply
10 posts • Page 1 of 1