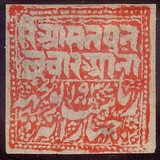 Gibbons only admitted Idar to the catalogue after it had ceased issuing stamps. The first ½ Anna types seem to have escaped notice entirely, despite being heavily used, and the second issue was regarded at the time as purely philatelic, although it was used also. The listings have been improved over the years: ISC members using Peter Röver's excellent article on Idar in India Post should note that his 'new SG' numbers have been changed again.

The first, ½ Anna, types are something of a tangle to sort out. The shades can be a bit tricky to assign, but Peter Röver's article will help readers wanting to go further. It's worth noting that all the ½ Annas exist in the white and coloured panels except for SG 1.

SG 1 Note that this has the unlisted 'JDAR' flaw in the right-hand vertical panel. This occurred on cliché 1 of all sheets of the white panels types, so it isn't rare. SG 1 is the only ½ Anna perf 11¼; the others were perf 10.85 or 11.15 (the emerald printings only).

SG 1a Peter Röver notes that there were two printings covered by this SG number: a bright green and a pale bright green.

SG 1b The emerald printings were the only issues perf 11.15.

The coloured panels types correspond to SG 1a to 1c. They do not show the 'JDAR' flaw, though.

SG 2b
de Selby lives, and will return
Top

The 1944 set was for long known used only on a single philatelic cover. This didn't help its acceptance. We now have ample evidence that it did indeed do postal service.

There were at least two printings of the lower values. The first ½ Anna was in blue-green

SG3 This also exists imperf between, but I have no faith in my pair. It's almost certainly a forgery, so I won't post it.

The second printing was in yellow-green

SG 3ba Pair from between vertical impressions of the plate, and

SG 3ba This may have been caused by accident, rather than design.

SG 4 also shows perforation oddities. This may be a genuine imperf pair

SG 4a but I'm not satisfied. There is also an imperf between horizontal pair:

SG 4b
de Selby lives, and will return
Top

There seem to have been two printings of the 2 Anna, although the shades are close enough to justify Gibbons listing only the one:

Gibbons lists this in both horizontal and vertical imperf between pairs. One type commonly found is this:

They all display the single perf hole in the margin. I suppose they should strictly be termed partially imperf between. There is also the rarer

which almost certainly comes from two different impressions of the printing plate. Incidentally, this is from the second printing.

SG 6 It also exists as a double print, but unfortunately, I don't have one.
de Selby lives, and will return
Top

Finally, there are the postal-fiscals. I think these were first listed in the 1990s.

A word of caution about these. There's no doubt they were used for postage, but they're much more commonly found used as fiscals. Therefore collectors should beware of cleaned fiscals offered as mint. (At least one of the stamps I'll show has obvious traces of cleaning.) Used stamps are even more a headache. The typical postal cancellations of the time were violet/purple rubber stamps, often with manuscript dates written in, as in this detail from a cover of SG 4:

For myself, I'd only buy used copies of the postal-fiscals on cover or large piece, or with a cast-iron clear certificate from the BPA.

SG F4 Pretty clearly cleaned, I think, but it at least illustrates the type

There are two shades of the final postal-fiscal:

I didn't intend to cover postal stationery in this little series illustrating Gibbons listings, but Idar may need to be an exception.

.
I recently bought these Idar stamps, the seller referring to them as essay proofs!!

They are the half anna issue that tony refers to in his seminal posting on the Idar issues. The top two columns are printed on card, the bottom ones are on paper.

Any opinions on their genuineness or otherwise would be gratefully received. 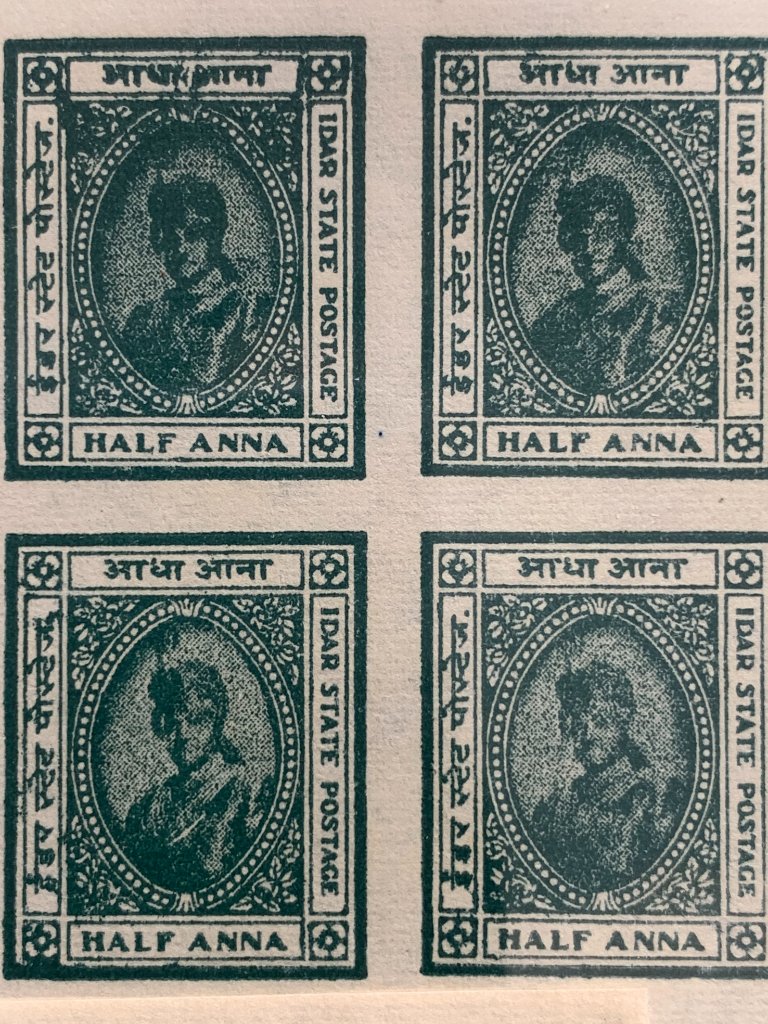 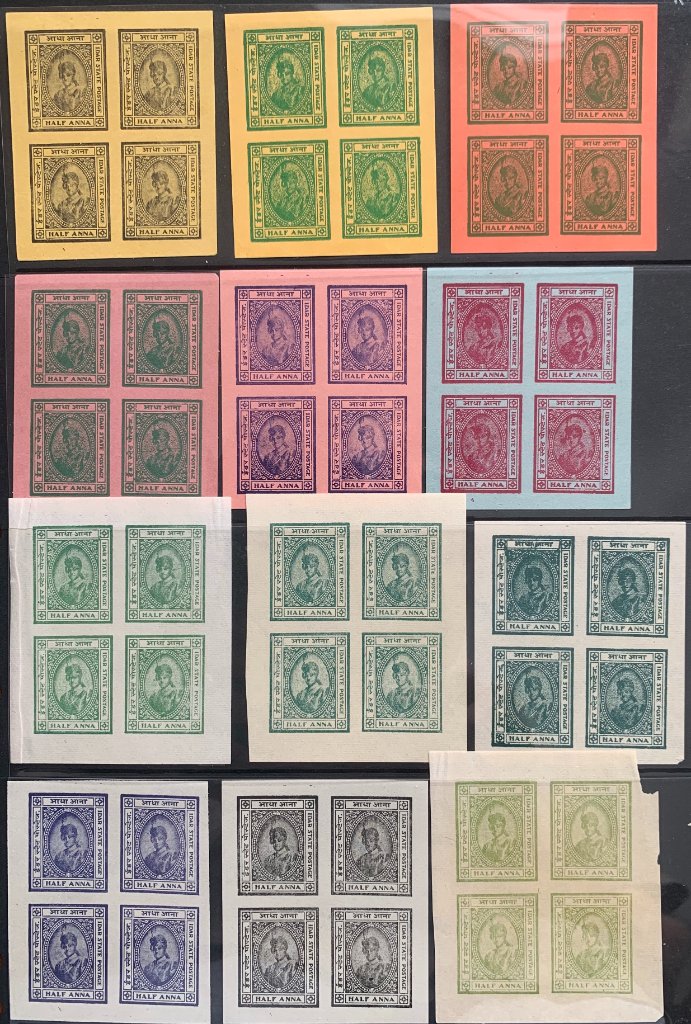 [/AddSpace]
Last edited by Global Administrator on 10 Jan 2021 23:19, edited 1 time in total.
Reason: Added pars and spacing and “air” – always a superb idea on Bulletin Boards! Use the "PREVIEW" button folks. It is there for a GOOD reason.
#shivshankarnair
Top
Post Reply
8 posts • Page 1 of 1