And another one from Suda:

Stampboarder Suda also came up with this one too, although it doesn't belong here, I have to put it in here:

When buying from buying from Buck A Cover in Canada, I needed to make up a minimum order & could not resist this one that had gone through the mail to Canada:

This one came from Bilby Stamps in NSW, I think this is the first Australian Racehorses fdc postmarked at Canberra City, which has NOT been signed by Athol Mulley who was Bernborough's regular jockey: 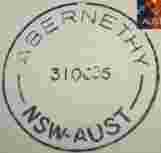 Saw this on eBay, & thought of you - seems to be "MERRYLANDS". - correction may be "ROSELANDS" - photos are a bit blurry, but other covers seem to be Roselands. There are 2 covers in pictures 3 & 4.

Thank you for the heads up.

A recent acquisition off ebay:

Picked up this one from Stampboarder suda today:

I previously had singles only on 4 separate covers.

& this one too, also from Stampboarder suda, which I didn't have listed:

Hi Brad,
No email received yet, so I sent one to you...did you receive?
Cheers.
Browny.
www.auspostmarks.com
Top

Hi Brad,
No email received yet, so I sent one to you...did you receive?
Cheers.
Browny.

Hi Browny
No email received either.
Could you try my other email address, bids9362ATbigpond.net.au
Quite bizarre to say the least.
Brad

A recent acquisition from ebay:

Would have been fun to have this postmark from Tamworth but it wasn't out at the time.

Another recent acquisition from ebay:


It sounded such a nice place I had to look it up:

Gladesville prides itself on its riverside views and bush settings along the Parramatta River. The nearby Gladesville Bridge, a Sydney landmark that links the North Shore to the Inner West takes its name from the suburb.

https://en.wikipedia.org/wiki/Gladesville,_New_South_Wales
Well I learned something today

Scoring well of ebay at the moment:

As you can gather I rather like horses (in particular race horses) on stamps, so when stamp catalogues, like this one arrive, I like to have a look:

Some how I don't really see "Seahorses" quite fitting into my horse collection.

It really doesn't look right, does it

Back to proper racehorses, this one from Stampboarder Michael Eastick:

I won this nice item on ebay recently & popped into Australian Stamps & Coins in Forest Hill Shopping Centre to pick it up:

And they gave me a pile of Racehorses to check over & among them I found this one:

& last but not least:

Ocean Grove.
Plus a few that allowed me to upgrade addressed & grubby copies for unaddressed & cleaner copies.

Posting on another thread reminded me that I had this Australian Racehorse cover postmarked at Flemington on Melbourne Cup day 1978 & signed by Arwon's winning jockey Harry White & trainer George Hanlon:

It is also signed by the Secretary of the VRC, W M Cox:

Apparently Australia Post had a stand at Flemington on the 4 days of the Cup Carnival - Derby Day, Cup Day, Oaks Day & Final Day. Whilst I was there on 3 of those 4 days (I had to work on Oaks Day), I don't recall seeing their stand there nor I have seen any records of how many covers they sold each day.

BigSaint wrote:Another recent ebay acquisition but only the gutter pair of Peter Pan:

To which I can now add a fdc with the full set of 4 recently acquired on Ebay:

Venturing into Delcampe, I found this Wesley Cover Service fdc, which can act as a spacefiller until an Australia Post fdc comes along:

Maxi-cards for this issue are pretty scarce here is a recent find from Woodville, SA:

A recent acquisition from ebay. Now I always thought Swansea was half up the east coast of Tasmania, but apparently there is another a few kms south of Newcastle, NSW.

A recent pick up from ebay of fdcs from GPO Perth Philatelic Sales Centre with pairs:

And another I found on ebay that I didn't know I didn't have:

A nice acquisition from Stampboarder Suda:

He also added in these maxi-cards, mint & Campbelltown SA Cup day postmarks, which were done by a South Australian dealer:

And last but not least: