An unusual one from eBay:

But what is the town of postmark?
I have some more images on the thread linked below

https://www.stampboards.com/viewtopic.php?f=10&t=83079
Some 2dc cancels in violet from Providence & Providence - Edgewood Station so I am inclined to think it is somewhere nearby.

Not really a new acquisition but a new signing:

Steve Swanson
While not one of the Mercury 7, he is a very experienced astronaut.

Steven Ray Swanson (born December 3, 1960 in Syracuse, New York) is an American Engineer and a retired NASA astronaut. He is married and has three children. He has received numerous awards and honors. These include the NASA Exceptional Achievement Medal and the JSC Certificate of Accommodation and many others. Prior to becoming a NASA astronaut, Swanson worked for GTE in Phoenix, Arizona, as a software engineer. Swanson has flown 2 shuttle flights, STS-117 and STS-119. He has logged over 4,700 hours in space and completed 4 spacewalks totaling 26 hours and 14 minutes. Swanson has also served in other roles at NASA, such as a CAPCOM for both International Space Station and Space Shuttle missions.

Steve Swanson
Swanson joined NASA in 1987 as a systems engineer and a flight engineer working on the Shuttle Training Aircraft. He was selected as an astronaut in May 1998. His first mission was STS-117, which launched June 2007. He was a mission specialist on this flight, also serving as flight engineer. He also served as a mission specialist and lead spacewalker on STS-119. STS-119 launched March 15, 2009 and landed on March 28, 2009. He launched to the International Space Station as a member of Expedition 39/40 on March 25, 2014 from the Baikonur Cosmodrome in Kazakhstan and returned to Earth on September 11, 2014. NASA announced Swanson's retirement in August 2015, and he currently works with Boise State University as a distinguished educator in residence assisting with programs such as the NASA SUITS Program.

https://en.wikipedia.org/wiki/Steven_Swanson
He is currently at Melbourne University involved in the " Welcome to Mission Discovery" programme being run this week. The young master is attending & was able to obtain this autograph for me. A job welcome & the 1st mission accomplished.

This one is not from one of the selected 305 post offices:

Austin - South Austin Station
Interesting to note that Jim Forte does not list this post office nor does it appear to exist currently.

Kylestampsoregon
Well on the way to 25 post Senior Member

I have one from the recovery ship U.S.S NOA, DD-841https://share.icloud.com/photos/0UuJk3_FI-BC5nicQDY0Xj4VQ#Lyons,_OR[*]
Top

I thought I asked you on another thread NOT to use these links as in this case this link does not work:


Kylestampsoregon wrote:I have one from the recovery ship U.S.S NOA, DD-841https://share.icloud.com/photos/0UuJk3_FI-BC5nicQDY0Xj4VQ#Lyons,_OR[*]

On page 2 of this thread I posted these:

I have one for John Glenn's flight on it's way from ebay.

And it indeed arrived today & signed by John Glenn to boot:

The issue with this postmark is that the USS Noa was not on the list of post offices that received this stamp & as the USS Noa was in the North Atlantic Ocean at the time, the postmark could not have been applied on that date. Obviously it was backdated for someone, as a favour, perhaps John Glenn, who has signed the "fdc". It has been suggested that the earliest date the USS Noa could have received a supply of these stamps was February 23, 1962.

PS I wonder if one of those will exist

I understand that the postal clerk on the USS Noa admitted to backdating about 300 covers for February 20, 1962. I don't know how many were postmarked February 23, 1962.

PS The search goes on for where USS Noa picked up the Project Mercury stamps. A suggestion has been made that it was Puerto Rico.

Can you post your image here instead of a link

I found this interesting one from Pakistan for Gordon Cooper's flight on eBay:

Interesting about the dual postmarking for the delay of the flight & that 1000 of these covers were done by Pakart.

I thought the insert was similar to those done by Overseas Mailer.

BigSaint wrote:On May 5, 1961 NASA Project Mercury astronaut Alan Shepard aboard his Freedom 7 capsule powered by a Redstone booster, became the first American in space. His suborbital flight lasted 15 minutes, 28 seconds. This stamp was issued by Amvets (American Veterans) to celebrate this event.

If anyone has anymore information on Amvets & these poster stamps, please post it here

Has anyone seen these used on any Project Mercury covers

Well this splashed back down to Earth & into my PO Box:

And inside was this:

A lift off cover from Wallops Island for John Glenn's orbital flight with Amvets cinderella affixed. Now I cannot tell whether then cinderella was added on 20th February 1962 or 1st February 2019 or somewhere in between, I can only accept it as what it is until I find one that is tied to the cover.

Of course we all know that John Glenn lifted off from Cape Canaveral in Florida rather than Wallops Island Virginia.

Wallops Island is a six-square-mile (16 km2) island in Accomack County, Virginia, part of the Virginia Barrier Islands that stretch along the eastern seaboard of the USA.

Wallops Island proper, originally known as Kegotank Island, was granted to John Wallop by the Crown on April 29, 1692. Ownership was divided through the years, until the Commonwealth of Virginia seized the property in 1876 and 1877 in lieu of unpaid taxes. From 1877, ownership was again divided and subdivided until 1889, when it was held by various trustees for the Wallops Island Club. In 1947, the U.S. Navy began using the upper two-thirds of the island on a lease-rental basis for aviation ordnance testing. The National Advisory Committee for Aeronautics (N.A.C.A.), forerunner of NASA, leased the lower 1,000 acres (4.0 km2) for rocket launching facilities.

The island is used primarily for NASA's Wallops Flight Facility (WFF), including the Mid-Atlantic Regional Spaceport. The WFF is operated by the Goddard Space Flight Center in Greenbelt, Maryland, primarily as a rocket launch site to support science and exploration missions for NASA and other Federal agencies.There have been over 16,000 launches from the rocket testing range at Wallops since its founding in 1945 in the quest for information on the flight characteristics of airplanes, launch vehicles, and spacecraft, and to increase the knowledge of the Earth's upper atmosphere and the environment of outer space.

dxm55
Well on the way to 25 post Senior Member

Very nice Velvatone cachet and tough to find with the Panama stamps!
Top

dxm55
Well on the way to 25 post Senior Member

BigSaint wrote:I found this interesting one from Pakistan for Gordon Cooper's flight on eBay:

Interesting about the dual postmarking for the delay of the flight & that 1000 of these covers were done by Pakart.

I thought the insert was similar to those done by Overseas Mailer.

Brad, likely the cover came through the hands of Clyde Sarzin and he provided the insert. He dealt with almost all the foreign philatelic bureaus and distributed FDC's from around the world. You can often find special combos done by himself with the same inserts - often with quantity done and a price. Clyde was also in NY so he may very well have known the gentleman that produced the overseas mailers and used similar inserts.

Without Clyde Sarzin the FDC (and space cover) world would be much less interesting.
Top

Thank you for that info dxm55.

In 1962 John Glenn aboard Friendship 7 became the first American to orbit Earth. His return to space in 1998 at age 77, on the shuttle Discovery, heightened interest in the space programme.

Fine is a town in St. Lawrence County, New York with a population of 1,512. The town is named after Judge John Fine, a businessman involved in settling the town. Fine is on the east branch of the Oswegatchie River about five miles southeast of South Edwards & about 100 miles north of New York City. It had been locally known as "Smithville" from William P. Smith, who was an early resident there.

An eBay purchase from Ratface (the mind boggles with that call sign), a Project Mercury fdc with an add on cachet of Bugs Bunny & Marvin the Martian:

From eBay in Canada:

It shows a Redstone rocket from earlier flights in of the Atlas rocket.

Singapore is not a usual place I receive items from, but this nice Project Mercury second day cover arrived from there:

With AMVETS label cancelled on arrival in Italy

And from North Carolina, USA with Jupiter rising:

New finds for me for Project Mercury has been a little sparse lately but I did pick a an interesting batch recently, not first day but 1st Anniversary covers from far flung corners of the US: 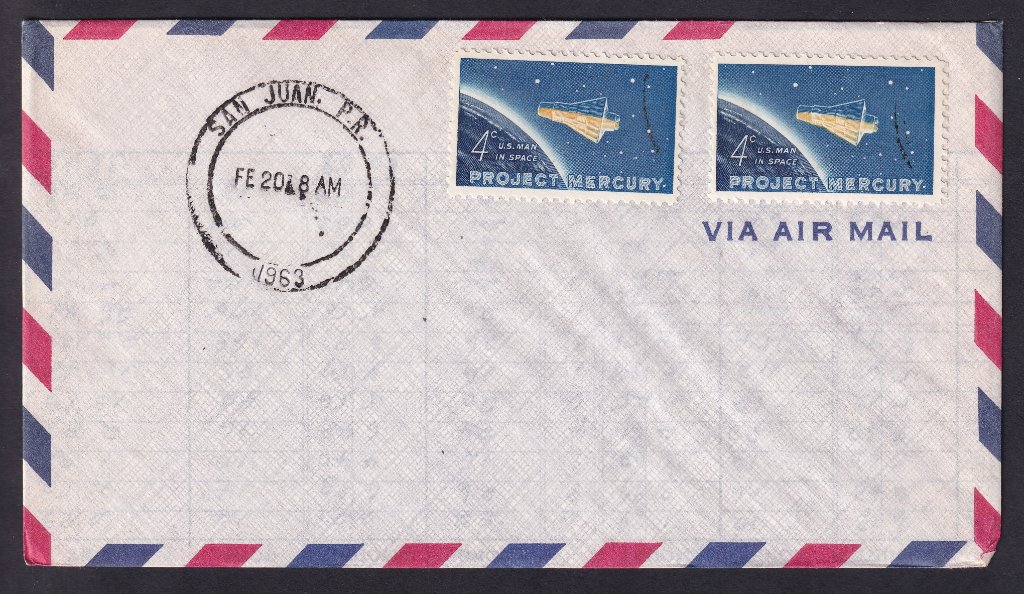 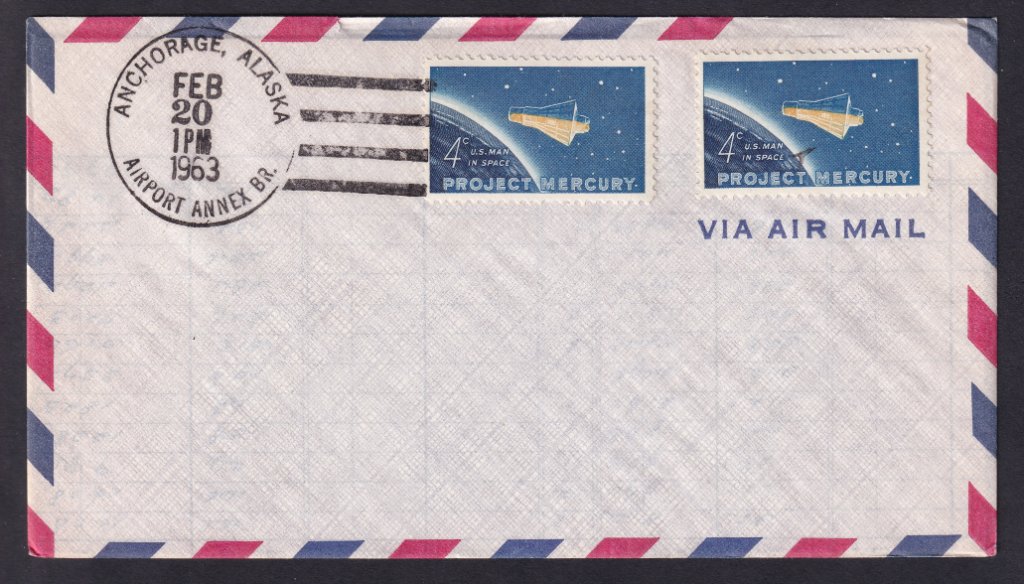 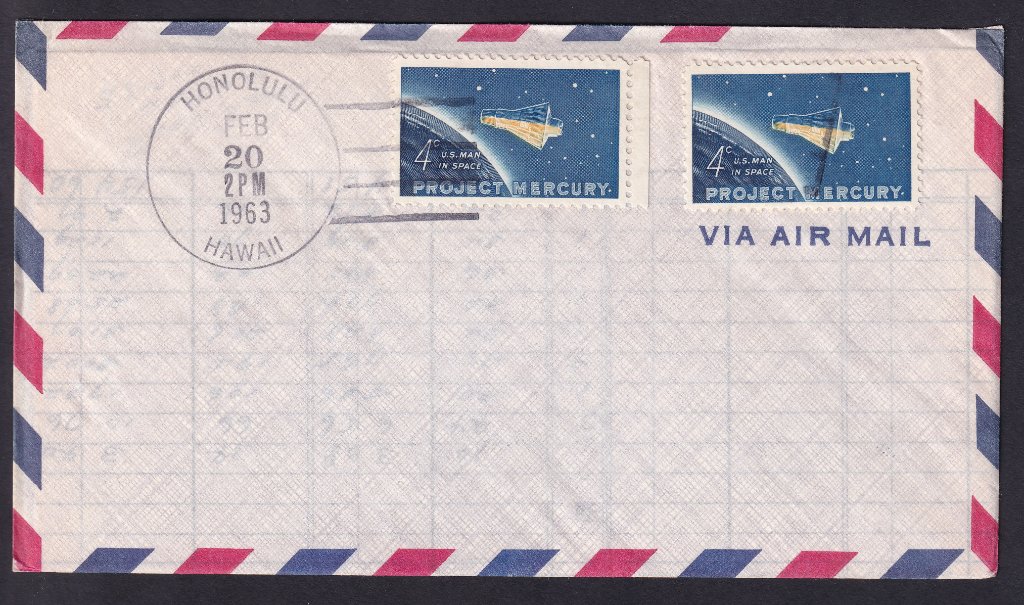 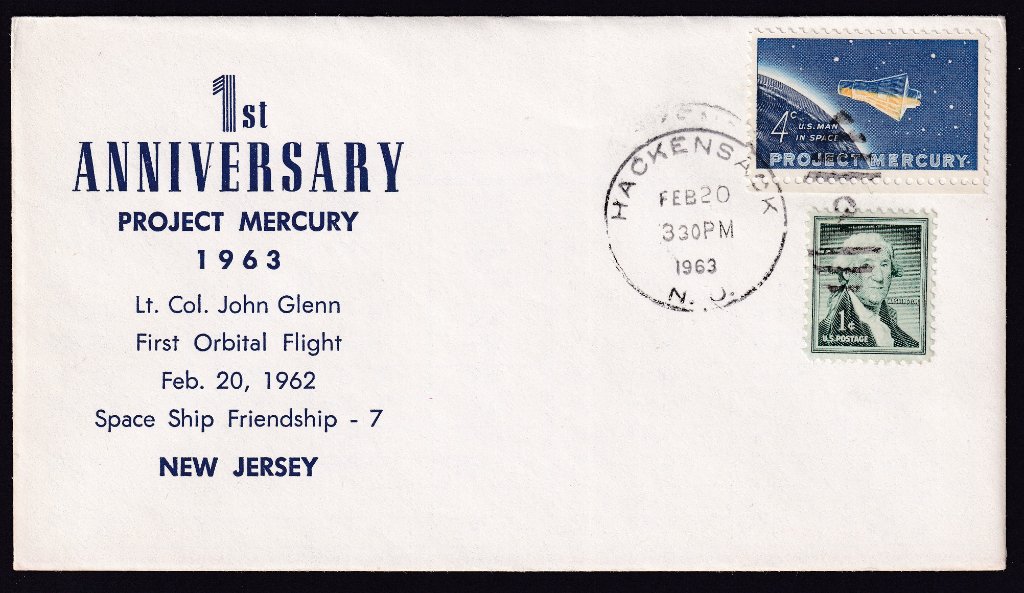 
Why did the Hackensack postmark interest me? Because it reminded me of an episode of the Twilight Zone called "The Mighty Casey", about a pitcher for the Hoboken Zephyrs, that aired around that time. It was about as way out at the time as putting a man on the moon. 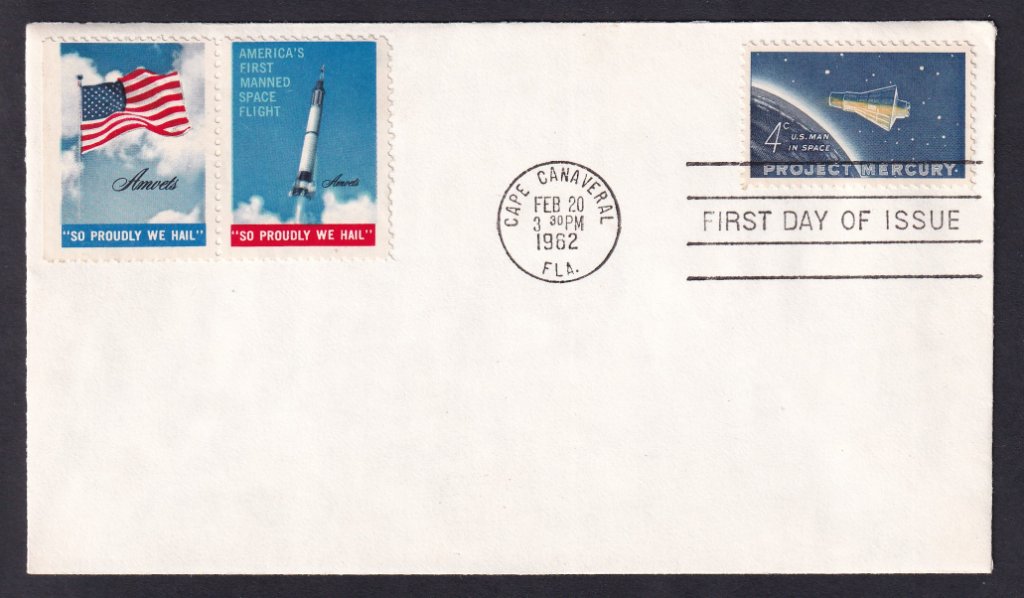 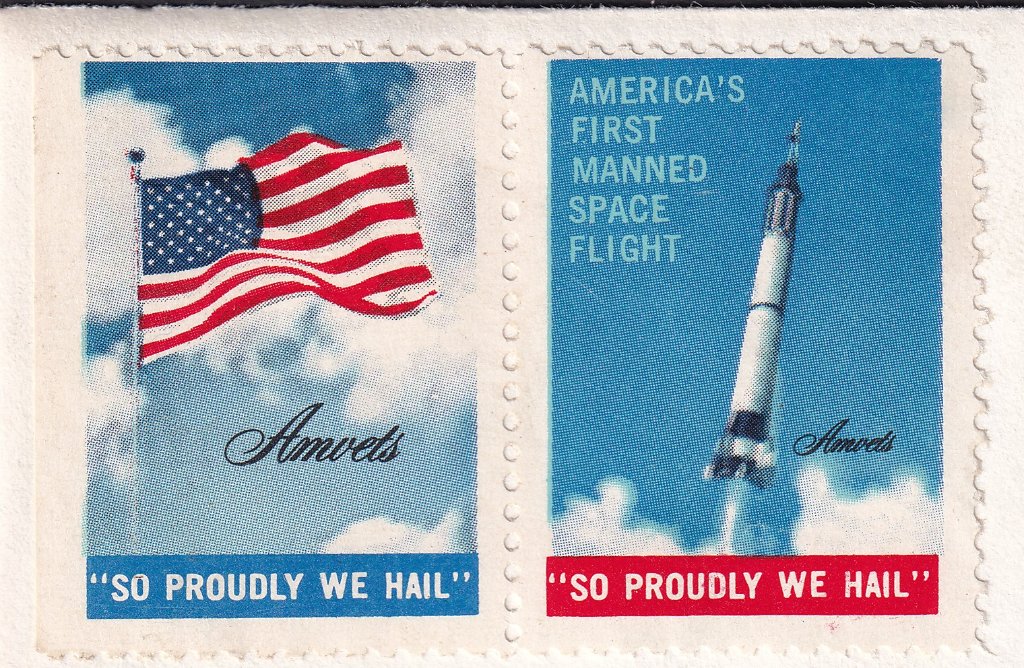 But when were they added, before or after postmarking? That we will never know.

A recent acquisition of I a cachet I had not seen before: 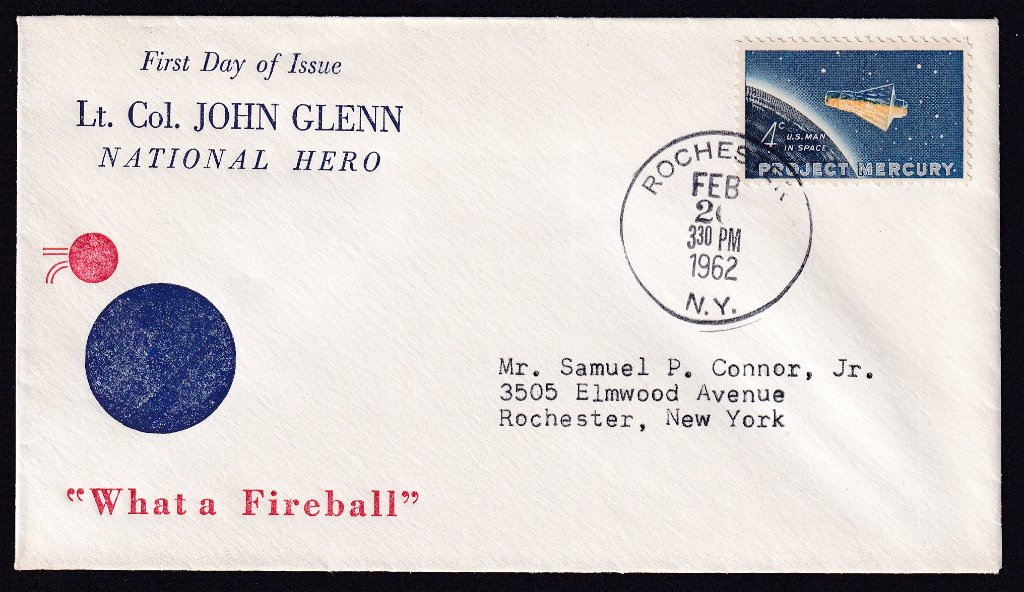 A recent acquisition of a cachet that is unknown to me: 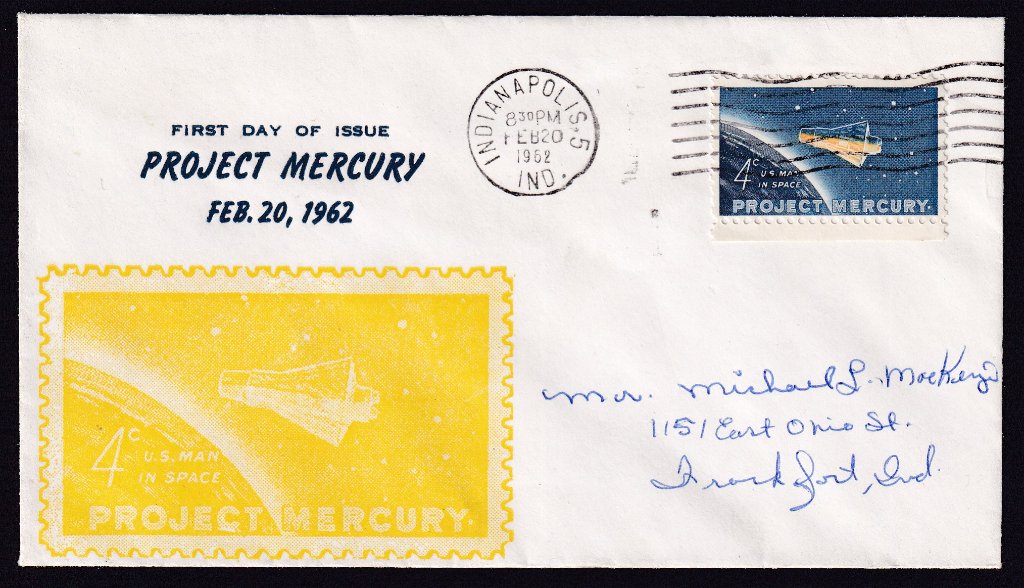 A new arrival, it's been a while: 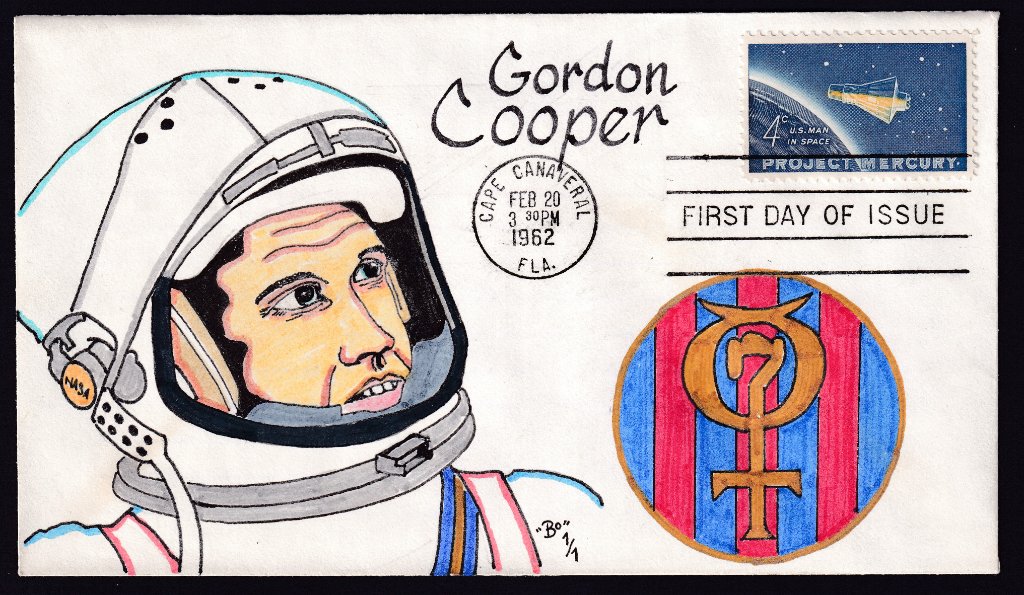 I might have one of these for you now?
White Plains New York cancel, yellow label with blue text, unaddressed on a PTPO cover.

A search for “Plains” in the forum found nothing. 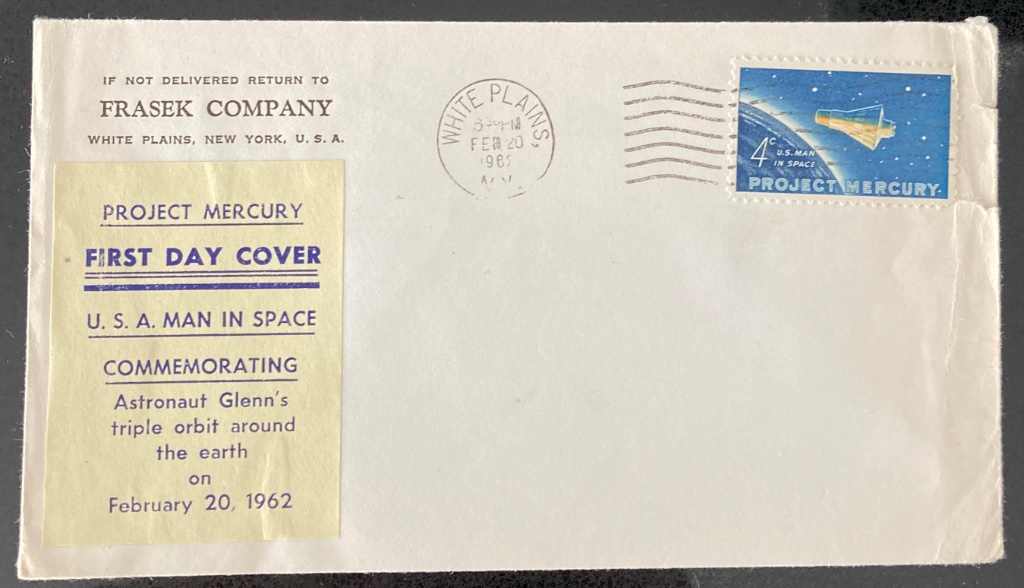 -- We are all standing on the shoulders of giants --
Top 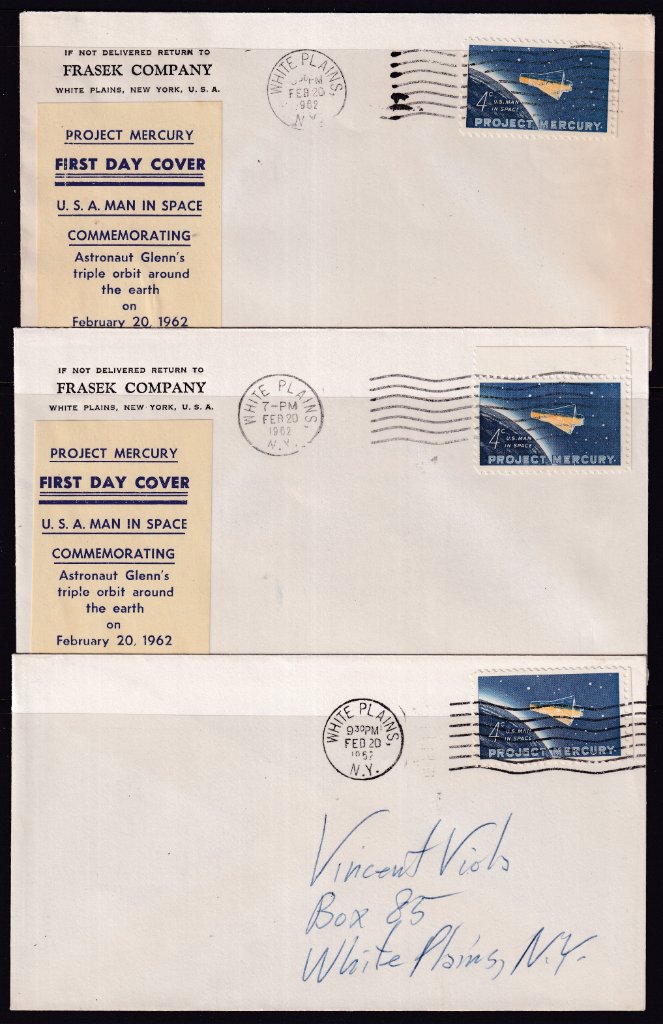 
Thank you once again for looking for me but I will pass.

No problems.
Good luck in your quests.
Cheers

-- We are all standing on the shoulders of giants --
Top 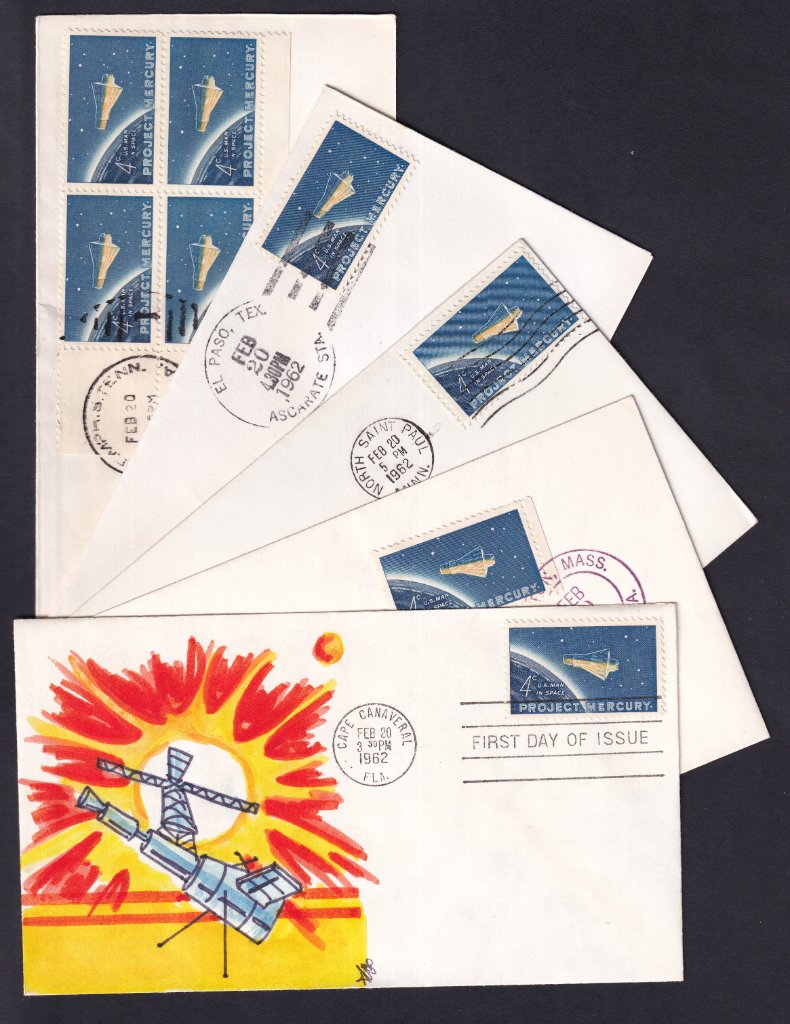 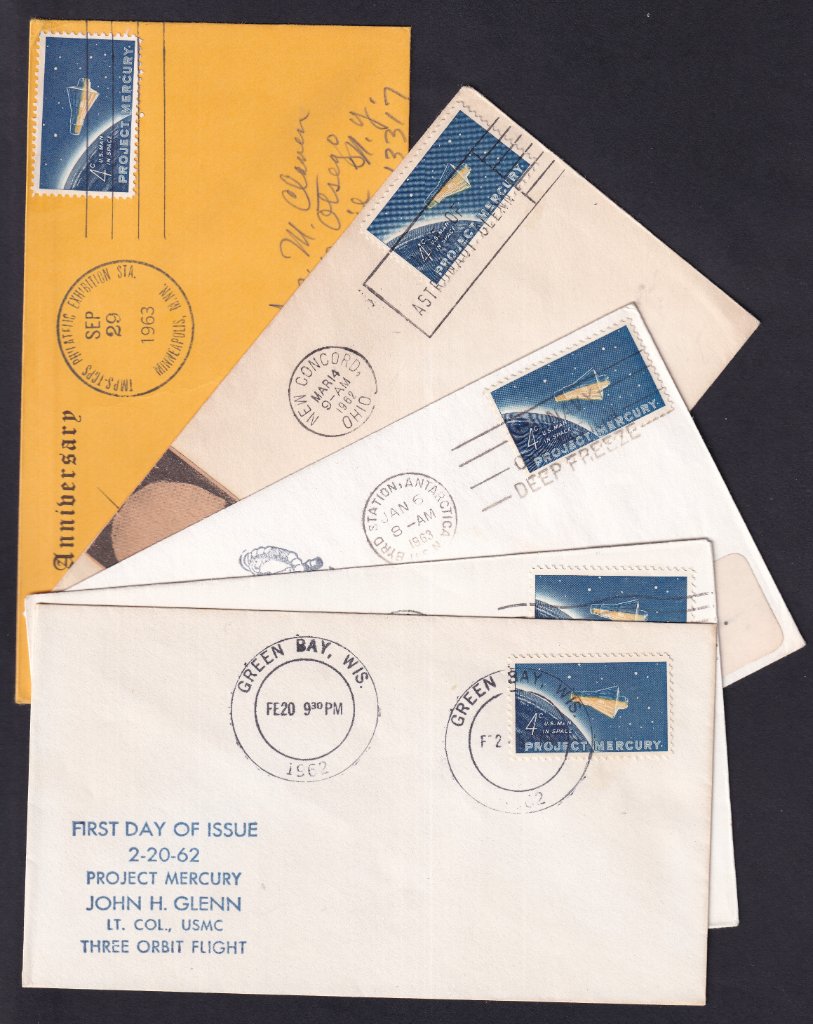 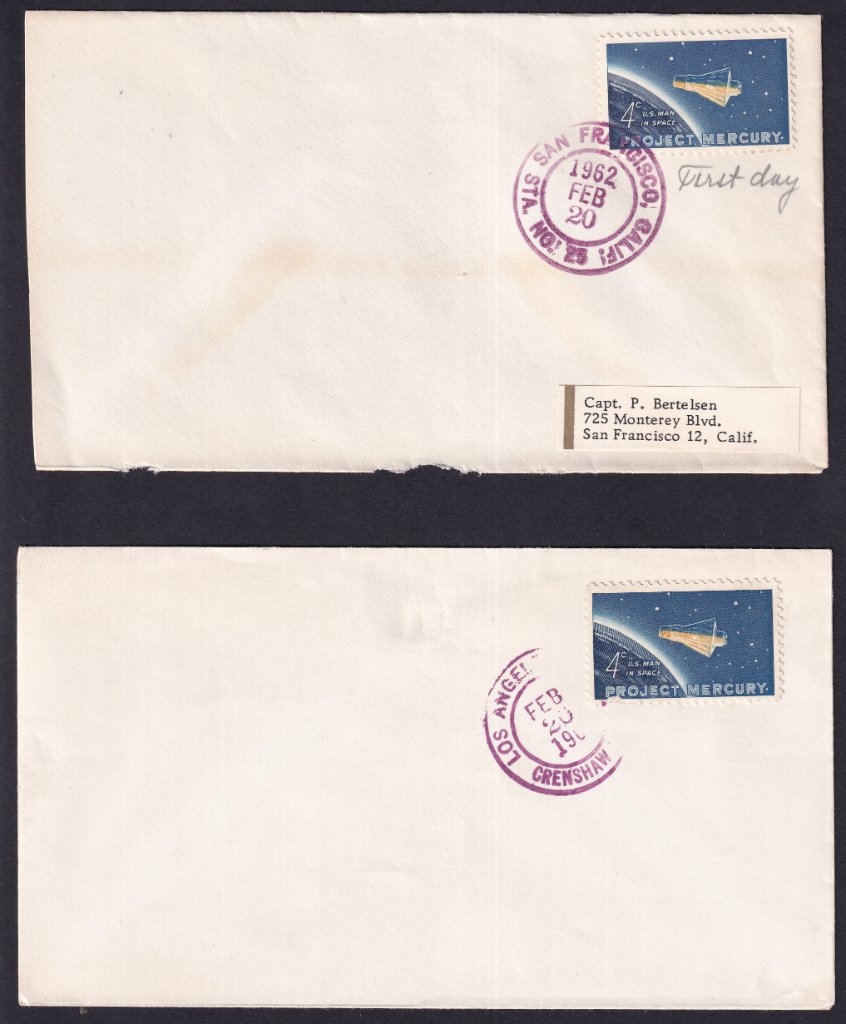 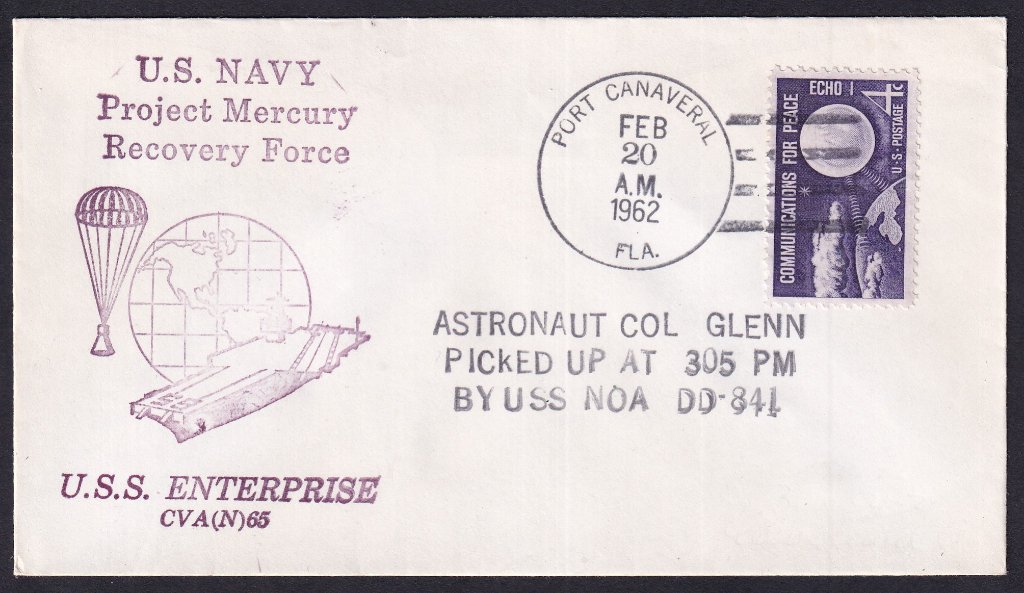