A seldom seen Australia Post Hermes Cachet fdc. These were not as popular as the Wesley or Royal cachet fdcs also sold in the Post Offices.

From Buck A Cover, as given the heads up by Stampboarder Collectrix:

Picked up this fairly poor example of Edgecliff NSW from ebay:

Picked up this interestingly addressed fdc on ebay recently:

Don't know if this is a GB postal marking on the reverse or one from the Girl Guides Association.

Another I recently picked up on ebay:

Another I picked up on ebay:

I have been looking for a perfin on a 1960 Melbourne Cup stamp for years & this one arrived today from ebay:

Most times the "T" is not perfectly aligned as the stamp was fed into the perforating machine twice to make the letter. The perfin was a straight line of five dots, so the sheet was fed in vertically to create the upright & horizontally to create the bar on the top of the "T". It was luck more than good management for these to align perfectly.

If anyone has any spare Melbourne Cup perfins please let me know.

This one arrived from Stampboarder goof today:

Together with a couple of other Melbourne Cup items by cartoonist "WEG":

Whilst I have seen these drink coasters "unused" before, I have never seen them postmarked.

Something I came across recently, not fdi,

This cover is postmarked on the day that Archer was inducted into the Australian Horse Racing Hall of Fame, with a pair of the Melbourne Cup stamps to mark the two Melbourne Cups he won (1861 & 1862). His stamp for the 1960 Melbourne is also added.
Specialist Collector of World Horse Racing Covers, Melbourne Cup & Kentucky Derby, & JFK fdcs.
Top 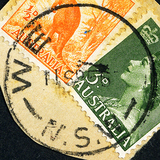 Two FDC on eBay at present, used from Hampton Vic.

Thank you Collectrix but I think Mr McDougall was a prolific collector, Tony Shields had several examples too:

A Royal to add to my WCS from ebay.

A scarce "OHMS" fdc originally sent to dignitaries by the Postmaster General:

Picked up the next 5 1960 Melbourne Cup fdcs from Stampboarder suda today:

Kind of spoils the surprise when the contents are written on the back. Nice handwriting.

When I first looked at the postmark on this one, I thought it looked like "Tempelo":

Mr Norfolk Island found this one for me:

Mr Norfolk Island also allowed me to re-unite this pair of "Royal Flemington":

Geelong fdi from ebay, just love the hand writing of the address:

Note not taxed, like many underpaid fdcs, as postage to NZ was 8d at the time.
Specialist Collector of World Horse Racing Covers, Melbourne Cup & Kentucky Derby, & JFK fdcs.
Top

A new one via ebay:

Whilst cleaning up today I found this one from the GPO Hobart:

with some add ons:

What a fairy tale it might have been if "Gunsynd, the Goondiwindi Grey" had won the 1972 Melbourne Cup rather than finishing third.

Included in a lot I purchased from Mossgreen today:

Balaclava.
Balaclava is an inner suburb of Melbourne, 7 km south from Melbourne's Central Business District, in the St Kilda East area & was named after the Battle of Balaclava that took place on 25 October 1854, during the Crimean War.

Special Aerogramme for "Qantas 40 Years of Service" cancelled with Winton Qld Machine Cancel for the 40th Anniversary Commemorative Round the World Flight.

But interesting in that New York 17, I am pretty sure is "Grand Central Station".

Another from Mr Norfolk Island but not first day:

A recent acquisition from Glen. The QEII blue 5d was issued on 1st October, 1959, but some how this one managed to be postmarked 2 months earlier on 1st August, 1959 at North Maitland NSW:

A recent pick up on ebay for my AAT collection:

Then I thought how much fun it would be to have a Melbourne Cup fdc postmarked at Hay, as horses eat "hay".

Has anyone seen one

And I thought Hay was out the way but it is the "Big Smoke" compared to Nunjikomita. Where is Nunjikompita you ask

Another fun one to have on a Melbourne Cup fdc as we like to put a dollar ($) on a horse:

Where is the town of "Dollar" you ask

I posted this one on my 2017 Melbourne Cup Competition thread today & here is the link to the competition:

The town of Tumut has a nice Melbourne Cup flavour about it.

Because Dame Nellie Melba was the first lady member of the Victoria Racing Club (VRC) I would love to find a fdc of this stamp postmarked at Flemington.

Any cachet or no cachet is fine.

Something else recently I picked up from the time & thought wouldn't it be nice if I could find this cover with the 1960 Melbourne Cup stamp on it:

Received this one from Stampboarder Chris Gray today:

And this one from Chris Gray too:

A recent acquisition off ebay:

A new acquisition via eBay & isn't appropriate (for AFL fans) that is should be Richmond Vic.:

Another from the wonderful world of eBay - Pinaroo, SA:

Apart from the address being rather brief:

One I recently picked up this "Hermes" Aust Post fdc on Delcampe, not a postmark I didn't have, but an interesting destination:

Córdoba is a city in the geographical centre of Argentina, in the foothills of the Sierras Chicas on the Suquía River, about 700 km northwest of the City of Buenos Aires. It is the capital of Córdoba Province and the second most populous city in Argentina after Buenos Aires, with over 1,300,000 people.

Argentina has been a long time producer of thoroughbreds with Hussonet making a big impact on the Australian thoroughbred breeding industry.

However the best horse come out of Argentina is Invasor.

Invasor (foaled August 3, 2002) is a Thoroughbred racehorse bred in Argentina by Haras Clausan. The winner of the 2005 Triple Crown in Uruguay, he was later purchased by Sheik Hamdan bin Rashid Al Maktoum, who paid approximately US$1.4 million for the horse. His two biggest wins were the 2006 Breeders' Cup Classic, in which he defeated heavily favored Bernardini and highly fancied Lava Man, and the 2007 Dubai World Cup, the world's richest horse race. He finished racing with a record of eleven wins in twelve starts and career earnings of $US7,804,070. He was voted the Eclipse Award for American Horse of the Year and led the year-end World Thoroughbred Racehorse Rankings in 2006. In 2013 he was inducted into the National Museum of Racing and Hall of Fame in Saratoga Springs, New York.
Specialist Collector of World Horse Racing Covers, Melbourne Cup & Kentucky Derby, & JFK fdcs.
Top

Another Delcampe acquisition which I thought was another exotic destination in Tenerife, a Spanish island in the Atlantic Ocean but instead it was Teneriffe, Queensland, an inner city suburb of Brisbane, on the Brisbane River near New Farm, Newstead & Fortitude Valley:

More from Delcampe with the scarcer "Green" Royal Cachets: