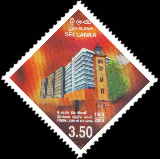 Images of the front and back of a cover sent from Corfu on 12 January 1939 to London by surface mail are presented. The cover, based on information on the back, was sent by the well-known British novelist, poet, dramatist and travel writer, Lawrence Durrell.

He and family members were known to have moved to Corfu in March 1935. He and his wife exited the island, moving to Egypt when Greece became occupied by invading forces in 1941. Hence, the date of posting together with Durrell's known whereabouts, add authenticity to he being the sender.

My main interest, though, is with the red cachet which has been applied to the front and back of the cover, once it had been re-sealed after inspection.

Various questions come to mind such as: Why was it necessary to inspect the content of what appears to be a personal letter? Was it the Exchange Control Division of the Central Bank which carried out the inspection? How long did Greece engage in such a practice?

Was the inspection carried out in Corfu, Athens or elsewhere? Do other covers exist in which the impression is in a colour other than red? Any feedback about such issues or other information would be most appreciated.
Top 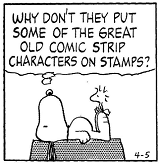 I can't help with the cachet question (but I'm keen to hear the answer), but Durrell's books are gaining more and more recognition, first edition values are climbing and collectors are starting to get serious about collecting him. The value of your cover may lie more with it's connection to the man rather than the interesting postal history it represents.
Always seeking bookseller labels....Album of Book Trade Labels
Author Site: Benjamin L Clark.com PSCC #157
Top 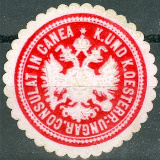 Thanks for sharing this cover.

Years ago, I remember years ago enjoying very much Gerald Durrell's book My Family and Other Animals about his time living on Corfu.

I have a number of covers with cachets like this from Crete.

Most of the cachets look like your one with a figure of Athena in the middle. This one says Bank of Greece at the top and Exchange control of Corfu at the bottom (or something similar as I can't make out the last word).
Nigel
Top

Thanks to both of you for your comments. These show that not only was Lawrence a writer of acclaim, but also his brother, Gerald.

In respect of the red cachet, thanks to Nigel for all his inputs. I presume that all the covers you have from Crete are in red ink.

I am sorry that the two impressions on the cover are feint; the front one is marginally clearer than the one on the back. Having taken a close look at it, let me spell out each word using the Greek alphabet (I remember using some of these when I studied Physics, Finance and carried out Statistical Data Analyses). All are capital letters and are as follows:

Nigel, I expect that despite me spelling out each letter, you'll tell me your first effort was spot on.

I also remember seeing lots of Greek symbols when I was a maths and physics student!

I think the exchange control cachets on mine are in violet although I don't have them to hand at the moment.
Nigel
Top

Apart from the curious markings indicating a Central Bank inspection, this item has wider interest as it was sent by a well-known author. It would be interesting to know if there was a letter inside and if so what it said. Can you oblige? Many thanks. Belfire
Top

Sad to say there was no letter inside when I bought the cover. In fact, the dealer was not aware of whom the sender was - otherwise, I expect I would have been asked to pay a lot more for it. One task for me is to try and identify the addressee: was she a relative, a fellow writer or what? The problem is that this task is on a list of others which is 'longer than my arm'.
Top


Hello Nigel and all,

Have a cover from Greece as shown with a control censor label. Postmarked 1949. Have a question please regarding the background of instituting the control censor. Since It was reintroduced in 1948 and continued until 1951, does the description below justify the enforcement or was it due to the Greek civil war?

"In 1944, the government of newly liberated Greece faced a crisis of staggering proportions, with a devastated economy and a currency undermined by rampant hyperinflation. In 1947, Paul Porter, Chief of the American Economic Mission to Greece made a trip to assess the financial quagmire and put together a report known the Porter Report in March of 1947. Per the report, measures were necessary to improve the balance of payments and one of the recommendations was that all incoming and outgoing mail should be subject to financial censorship to prevent the illicit flight of capital."

Pls do share your expert comments and many thanks.
Davis 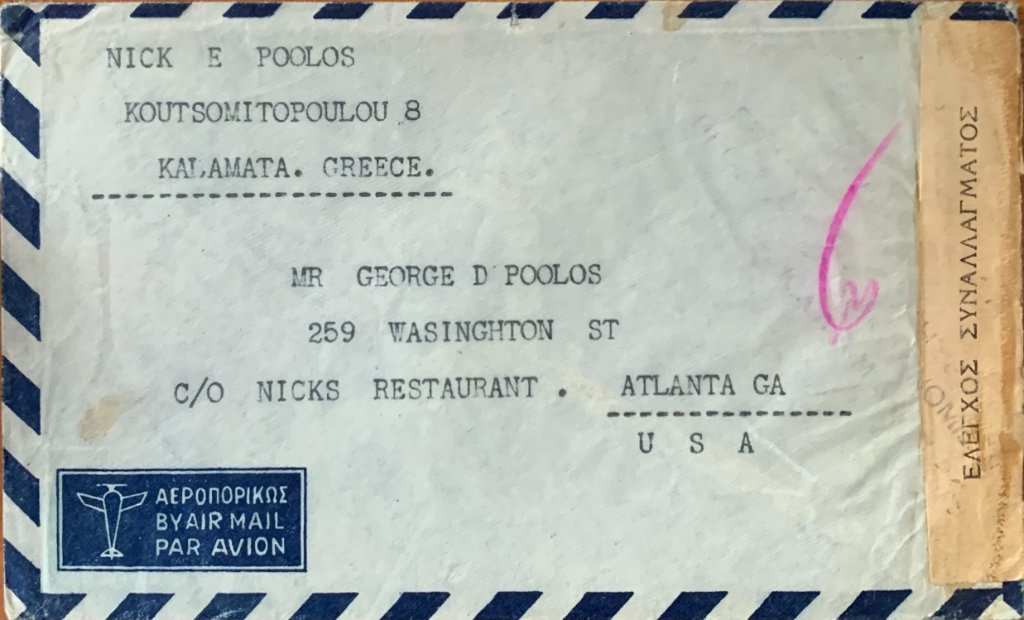 I am sure the value of the cover has increased after the TV series. Was watching it on cable yesterday!

The Durrells (known in North America as The Durrells in Corfu) is a British comedy-drama television series loosely based on Gerald Durrell's three autobiographical books about his family's four years (1935–1939) on the Greek island of Corfu.It aired on ITV from 3 April 2016 to 12 May 2019.

The series is written by Simon Nye, directed by Steve Barron and Roger Goldby, and produced by Christopher Hall. Lee Durrell, Gerald Durrell's widow and director of the Durrell Wildlife Conservation Trust, acted as consultant. The series was partly filmed on location in Corfu, as well as at Ealing Studios and Twickenham Studios in London.