I was going through another tub of stamps as I'm sorting out some of what I have here and found this cover all by itself in a chocolate box.

When I did a Google search I found 2 letters that were both sold some time ago and no reference on this board to the HMAS Shropshire. So I'm guessing that they aren't that common. It has been roughly opened and doesn't contain a letter. 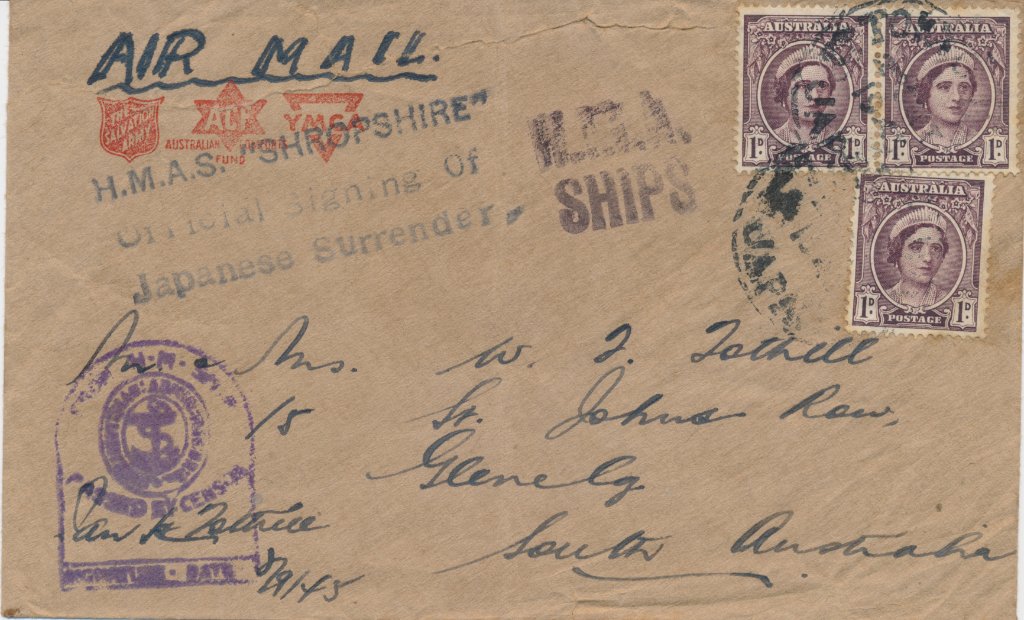 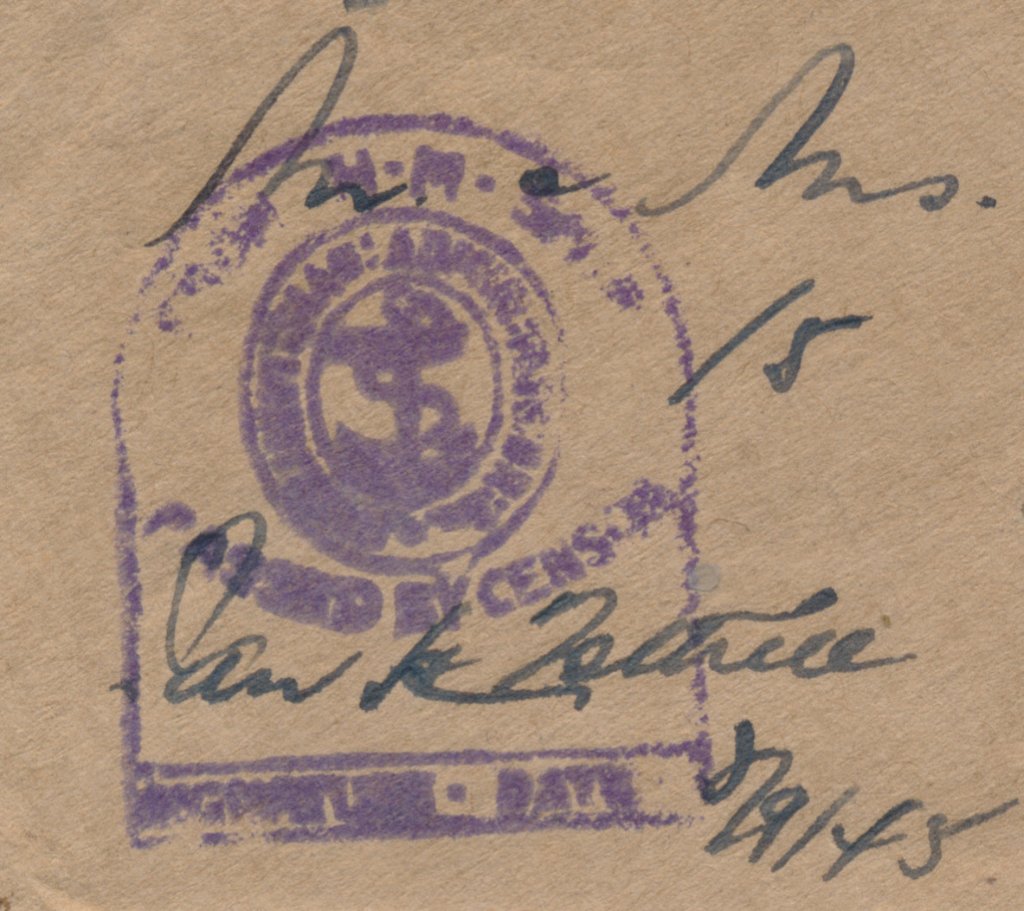 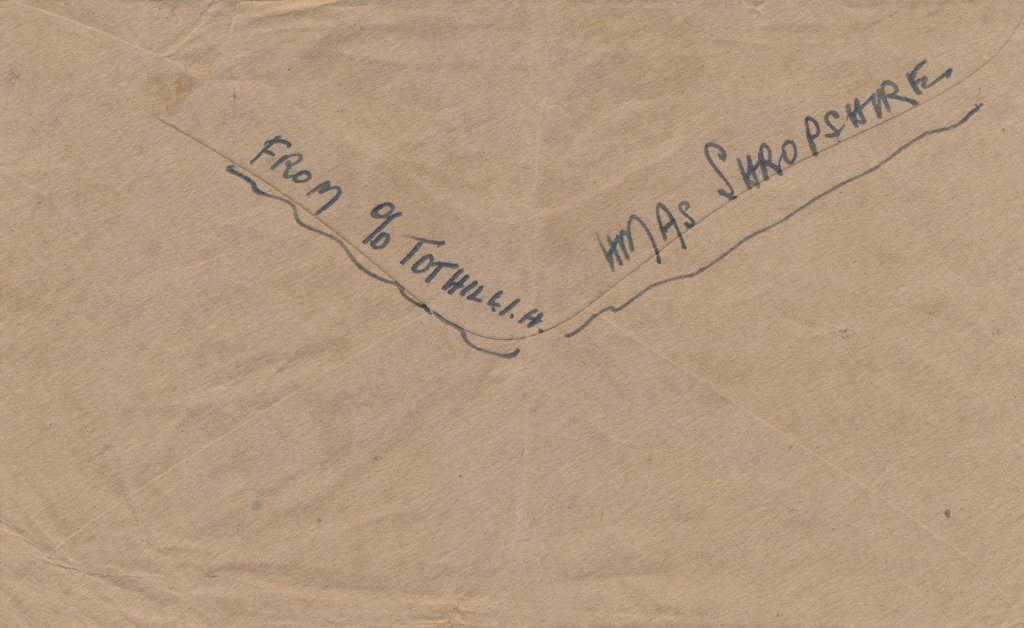 It isn't something that fits with what I collect so I'm looking at moving it on. The other covers (shown below) sold for £75 and £250 with the original letter. 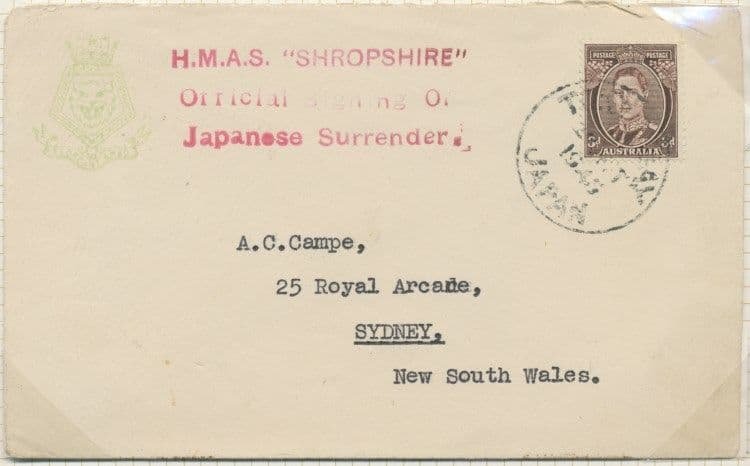 Commissioned in 1926 Shropshire was originally part of the British Mediterranean Fleet. She was present for the Spanish Civil War and supported the evacuation of refugees from Barcelona. At the outbreak of World War II in September 1939 the cruiser was reassigned to the South Atlantic for trade protection. Following the loss of the Australian heavy cruiser HMAS Canberra, it was announced that Shropshire would be transferred to the RAN as a gift.

In March 1944, Shropshire was involved in the Admiralty Islands campaign, in early October Shropshire was reassigned to Task Force 77, and participated in the Battle of Surigao Strait on 25 October. The cruiser was involved in the Battle of Luzon during January 1945, she returned to the Philippines in time for the Japanese surrender of the islands, then proceeded to Japan, and was present at Tokyo Bay on 2 September 1945 for the signing of the Japanese Instrument of Surrender. 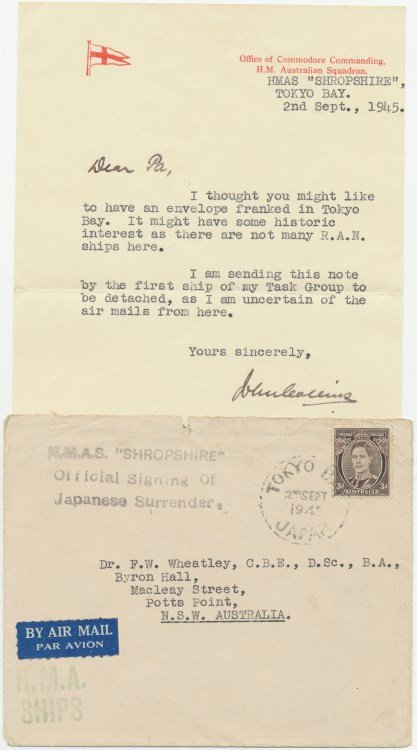 
I bet if you put yours in the For Sale forum here on Stampboards for $100Aus, it'd soon shift.

I have seen a few over the years, but they are not common. Nice find.

The cover above to large stamp dealer Alf Campe seems to point to a few savvy folks latching on the future curiosity value - right from the signing!

My stamp mentor, Ken Baker, the most successful dealer ever in this country, (who lived to age 104!) stressed to me time and time again, to always remember his sage advice - "Son, you CAN’T go broke, by making a quick profit".

Ken did not have a Harvard MBA, and neither do I, but oddly, simple and time proven business principles, often work better than fanciful theory, and greedy mark-ups - that mostly see stock sit around for decades. For 45 years, that simple advice I have followed to my great advantage.

If something cost me little - out it goes at an attractive price.

H.M.S.Shropshire was originally to be renamed after transfer to the Australian Navy in place of the sunken H.M.A.S. Perth. There was an outcry from the people of Shropshire and the name remained. Heavily involved in the battle for Okinawa where my father was involved in H.M.S. Howe, The Shropshire's gunnery office did a deal with U.S.N. fitters and gained an extra 14 quick firing A.A. multiple barrel guns, that proved invaluable and the ship survived virtually untouched for the entire Okinawa campaign although H.M.A.S. Australia had several Kamakazi strikes and lost her captain and many bridge officers, requiring extensive repairs.

The trade for the extra A.A. weapons was a case of whiskey and one of Gin from the officers wardroom supplies as U.S. ships were DRY! The gunnery office, whose name is revered in R.A.N. folklore was a Commander Bracegirdle.
I prefer to collect UK, British Commonwealth esp Pacific area ( not excluding West Indies/Canada ) and Western Europe. At the bottom of my zone of interest is Eastern Europe and communist countries.
Top

The surname of the sender and receiver was a bit of a famous name around Glenelg with a street name and a development carrying the family name.

I found this War Memorial naming I.H.Tothill. Third column third from the bottom. 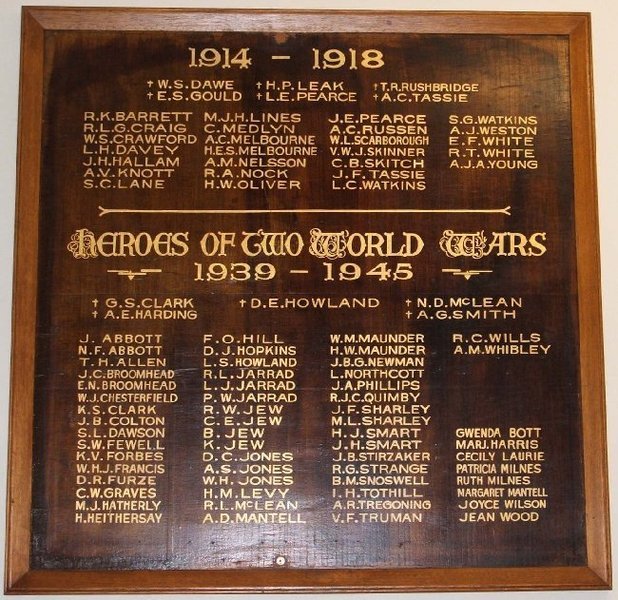 Transfer to RAN
Following the loss of the Australian heavy cruiser HMAS Canberra, a County-class cruiser of the Kent sub-class, at the Battle of Savo Island, it was announced that Shropshire would be transferred to the RAN as a gift.[7] King George VI announced on 10 September 1943 that the ship would be renamed Canberra.[7] However, around the same time, United States President Franklin Delano Roosevelt chose to commemorate the Australian warship's loss by renaming the under-construction Baltimore-class cruiser Pittsburgh as USS Canberra.[8]

The duplication of ship names with the United States Navy was against RAN policy, and it was initially felt that Australia had a greater claim to the name.[9] Protests in favour of retaining Shropshire's original name were received from the British elements of the ship's company, who felt that renaming a ship after one that had recently been sunk was inviting bad luck, and from citizens of the ship's namesake, which had adopted the cruiser in a Warship Week earlier that year, and thought that Shropshire's history and links to the community were being discarded without thought.[9] One letter proposed, that the ship be named "HMAS Canberra (the gift of HMS) Shropshire" in order to retain the old name.[8] The Australian government decided to retain Shropshire's old name after learning that the US offer had come directly from President Roosevelt.[8]

Shropshire underwent refit at Chatham from December 1942 until 20 June 1943.[3] Sources differ on the date of commissioning: although the commissioning ceremony was performed on 20 April, Captain John Augustine Collins successfully argued to have the ship recognised administratively as a commissioned Australian warship from 17 April, in order to keep Australian personnel (arriving that day) away from the RN rum issue.[4] The refit was not completed until 25 June.[3]

RAN service
Shropshire left the United Kingdom in August, as part of the escort for a convoy to Gibraltar.[3] After this, she continued on to Australia, and arrived in Sydney on 2 October.[3] At the end of the month, she joined Task Force 74 at Brisbane, and supported the amphibious landings at Arawe and Cape Gloucester during December.[3] In March 1944, Shropshire was involved in the Admiralty Islands campaign.[3] During April, the cruiser participated in the landing at Hollandia.[3] In May, while operating in the Wakde-Sarmi-Biak area, a bomb was accidentally dropped by a United States aircraft between Shropshire and HMAS Warramunga.[3] Although the bomb missed both ships and appeared to cause no damage, the cruiser's engines began to malfunction four days later, and Shropshire returned to Australia for repairs.[3]


Shropshire's forward turrets firing during the Battle of Morotai
The ship returned to service on 12 July, and provided naval gunfire support for operations in Aitape and Cape Sansapore during July and August, Morotai in September, and Leyte Gulf in early October.[3] Shropshire was reassigned to Task Force 77, and participated in the Battle of Surigao Strait on 25 October.[3] The cruiser was involved in the Battle of Luzon during January 1945, during which she was attacked by two kamikaze aircraft: one narrowly missed, while the second was shot down by HMAS Gascoyne close enough for debris to hit Shropshire.[3] Shropshire fired in anger for the last time during the Corregidor landings, then briefly returned to Australia.[3]

Shropshire returned to the Philippines in time for the Japanese surrender of the islands, then proceeded to Japan, and was present at Tokyo Bay on 2 September 1945 for the signing of the Japanese Instrument of Surrender.[3][10] The cruiser's wartime service with the RAN was recognised with five battle honours: "New Guinea 1943–44", "Leyte Gulf 1944", Lingayen Gulf 1945", "Borneo 1945", and "Pacific 1945".[11][12] Only five personnel died during the ship's RAN service, but although all five occurred during World War II, none were the result of enemy action; one drowned, and the other four were the result of accidents.[7]


Shropshire arriving in Sydney Harbour on 30 November 1945. The cruiser has just returned from Japan, and is transporting Australian soldiers home.
The cruiser remained in Japanese waters until 17 November, when she sailed for Sydney.[3] In May 1946, Shropshire transported the Australian contingent to England for the British Empire victory celebrations.[13] The ship returned home in August.[13] From January until March 1947, Shropshire was in Japanese waters.[4]

Decommissioning and fate
After returning to Sydney in March 1947, Shropshire was prepared for decommissioning, although she was not paid off into reserve until 10 November 1949.[4] The ship was sold to Thos. W. Ward of Sheffield, England, acting on behalf of the British Iron & Steel Corporation, on 16 July 1954, for 82,500 pounds sterling.[4] On 9 October 1954, the Dutch tug Oostzee began the voyage from Sydney to Dalmuir, Scotland.[4] Breaking commenced in Dalmuir on 20 January 1955, with the ship's hull then transported to Troon, where scrapping resumed on 19 September.[4]

A silver bugle presented to the ship by the King's Shropshire Light Infantry was kept by the RAN after Shropshire's decommissioning, and was later placed on display at the Russell Offices (which houses the Department of Defence) until at least the mid-1980s.[14]
Always interested in trading German material especially post war period.
Top

DarrenK wrote: ↑18 Aug 2022 15:39 who felt that renaming a ship after one that had recently been sunk was inviting bad luck


I've never understood WHY Australia (alone?) has had this incredibly dopey policy of keeping on naming new ships after ones already sunk or retired.

HMAS Sydney is the first one that comes to mind, They recently launched version FIVE. Hobart and Brisbane are on version 3 already.

It is not as if there are only 5 cities in this huge country.

An incredibly confusing and seemingly pointless policy. In line with most of our Military 'Thinking', admittedly.

HMAS Sydney (V) is the last of the three ships of the Hobart Class guided missile destroyers. Her sister ships are HMAS Hobart (III) and HMAS Brisbane (III). HMAS Sydney is based on the Navantia-designed F100 frigate and is equipped with the Aegis Combat System.

The keel of Sydney (V) was symbolically laid down on 19 November 2015, on the anniversary of HMAS Sydney (II)'s sinking in November 1941. She was launched on 19 May 2018 by Mrs Judy Shalders, the wife of former Chief of Navy, Vice Admiral Russ Shalders, RAN, in Osborne, South Australia.


My father served all of WW2 on an obscure ship named HMAS Manoora. Decades later these dolts trot out another new ship to the fleet, and name it ....... HMAS Manoora.

Henry I, Henry II.......Henry VIII
William Conquer to William whatever he will be.

All very "original" and you don't even have to be related, just some sort of royalty and off you go.

But Glen, I do agree that there are a lot more names we could be using and I suspect that by the time we get to name the submarines in 2050 they may have names like "Obsolete" "Antiquated" "Anachronistic" or maybe something more indigenous like "Waddy", "Boondi", or "Nulla Nulla". All things considered they will probably be as useful as a Woomera and Spear.
Always interested in trading German material especially post war period.
Top

If anyone thinks we will still be speaking English as a first language here in 2050 (theoretical arrival date) - when these Morons called the 'Defence Forces' finally gets some possibly working submarines, they are very optimistic.

These dunderheads have signed contracts for mega BILLIONS in recent decades, to give us a Banana Republic Defence capability, when we actually need it in place and working NOW.
.
Click HERE to see superb RARE & unusual stamps - FIXED low nett prices, high rez pix + NO 20% buyer fees!
Top
Post Reply
8 posts • Page 1 of 1